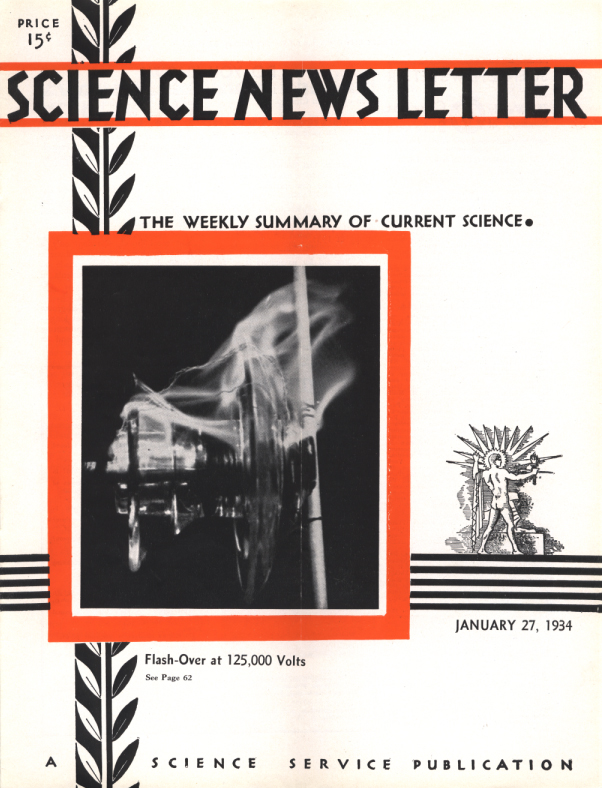 Beauty is, indeed, the most important if not the only reason for the choice of this week’s front-cover picture. A glass insulator, of the kind that electrically isolates high-tension [power lines] so that they may carry their power uninterruptedly, is shown flashing over after withstanding a potential of 125,000 volts. A routine laboratory operation at the University of Wisconsin has been glorified by the photographer.

The photograph does not show the insulator in the position in which it is used on power lines. To make the picture fit the frame of the cover, it has been turned clockwise through a right angle. Ordinarily, the tube conductor shown on the right of the picture would be across the top.

200-INCH TELESCOPE MIRROR TO BE POURED OF SPECIAL GLASS

The disc of the great 200-inch mirror of the new Mt. Wilson Observatory telescope now being built will be made of a superior sort of Pyrex glass and it will be poured at Corning, N.Y., in about a month.

Early plans called for a mirror of fused quartz, but now a superior Pyrex glass, which has a small volume change with temperature, has been developed for the special purpose of the 200-inch mirror. When a few years hence the new giant telescope is placed in operation on a southern California mountain peak, it will be the world’s largest, doubling in one gigantic step the diameter of the world’s present largest, the 100-inch on Mt. Wilson, Calif.

When the metal lithium is bombarded with ions of the heavy, mass two isotope of hydrogen, deuterium, alpha particles are ejected with a speed considerably greater than swiftest alpha particles from radioactive substances, experiments at Cavendish Laboratory, Cambridge, under the direction of Lord Rutherford have shown.

The research shows that a deuterium particle occasionally enters the kernels or nucleus of a lithium atom of mass six and that the nucleus that is formed then breaks up into two alpha particles, which are kernels of helium atoms. These two alpha particles escape in nearly opposite directions.

The capture of a particle by a lithium nucleus of mass seven causes a breakup of the system into two alpha particles and a neutron whose maximum energy is equivalent to 15 million volts.

Lord Rutherford has received a private communication from Prof. Hertz in Germany which states that he has obtained small quantities of deuterium or heavy hydrogen by applying a special diffusion method of separation to ordinary hydrogen. Such deuterium is so pure that it is impossible to detect the alpha line of ordinary hydrogen in its spectrum.