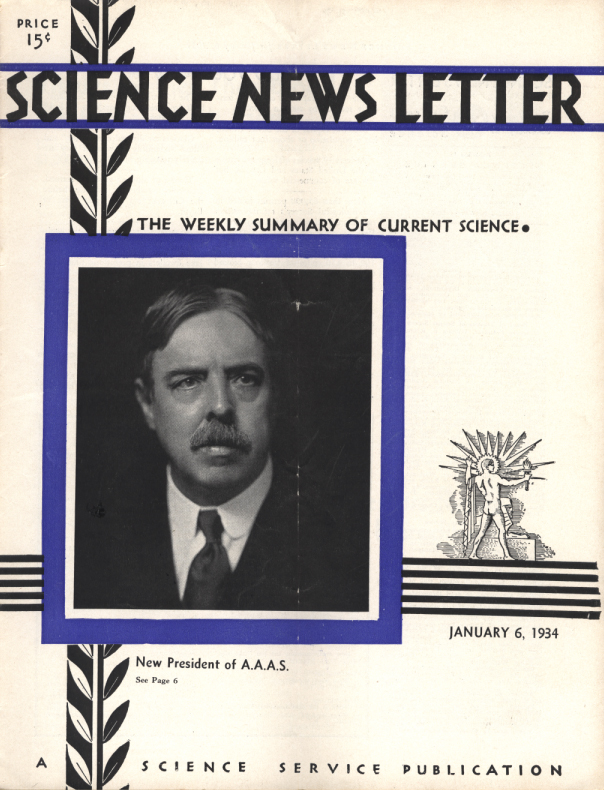 Dr. Edward L. Thorndike, psychologist and educator of Teachers College, Columbia University, was elected president of the American Association for the Advancement of Science. Dr. Thorndike, whose picture is reproduced on the cover, has been associated with Teachers College since before the turn of the century and is known to all students of education for his theories of learning and habit formation.

Great winds blow in the atmospheres of the distant stars compared with which the hurricanes of the Earths atmosphere are mere zephyrs.

Dr. Otto Struve and Dr. C.T. Elvey, of Yerkes Observatory of the University of Chicago, announced to the American Association for the Advancement of Science that while the outer gaseous atmospheres that surround the luminous lower strata of the stars have heretofore been assumed to be relatively quiescent, they have discovered in the rainbow spectra of stars evidence that powerful turbulent currents exist in the atmospheres of many stars.

A device that automatically takes the talk, including advertising, out of radio programs has been developed by Prof. Gleason W. Kenrick of Tufts College, Mass., who demonstrated this radio talk eliminator to the American Association for the Advancement of Science.

Seemingly endowed with intelligence and discrimination, this robot radio censor looks like a supplementary radio set that is hooked up with a conventional radio broadcast receiver. Actually, the talk eliminator works automatically and utilizes a combination of electrical devices that result in the impartial suppression of all talk and announcements, along with advertising “plugging,” that some radio listeners find objectionable.

The radio talk eliminator hook-up is such that whenever there is a quarter- of-a-second silence in the program, the radio set is silent for 10 seconds. When a speaker stops for breath, his momentary silence, detected by the talk eliminator, in turn silences the radio to his message for 10 seconds. The detecting “brain” in the talk eliminator is a detector amplifier similar to the automatic volume-control devices now commercially incorporated in radio sets. Whenever the current in the “brain” tube drops to zero for the predetermined fraction of a second, a selective relay comes into action that silences the radio for a predetermined length of time.