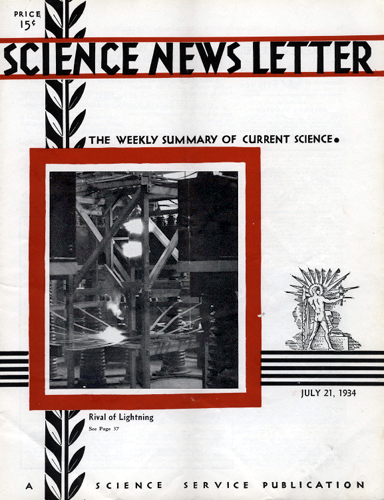 Man-made lightning rivaling nature’s own thunderbolts with electrical current of 250,000 amperes was put on display at Pittsfield, Mass., recently in a crashing, flaming exhibition by engineers of the General Electric Company’s high-voltage laboratory.

Measurements of current surges in power lines have indicated that a direct hit by a natural stroke of lightning causes the current to mount to only 150,000 amperes. The current in the demonstration was discharged at 150,000 volts potential.

Ordinary copper wires for handling heavy currents were blown apart and vaporized in a few millionths of a second during the demonstration. A section of reinforced concrete was shattered by the impact of the artificial lightning bolt just as a concrete structure is sometimes wrecked by natural lightning.

A metallic conductor large enough to carry the tremendous current without fusing is subjected to powerful mechanical forces during its transmission of the current. A flat strip of copper shows the “pinch effect,” which changes it from a ribbon to a nearly round cross section.

The new high-current apparatus is a companion instrument for the 10,000,000-volt artificial-lightning generator already in use at General Electric’s high-voltage laboratory. Both instruments are used in the research that the company is and has been making to study the effect of natural lightning on long-distance power-transmission lines.

Fine old elm trees, of which the eastern states are so justly proud, are now succumbing to a renewed attack of the Dutch Elm disease at the staggering rate of 200 a day.

The ravages of this affliction have become so serious that Congress appropriated $150,000 now being used for the work of checking the blight. Already death has reached 3,027 shade trees in the region around New York.

The greatest loss has been suffered by New Jersey, where the mortality of elms to date is 2,456. And each day, new cases of the disease are discovered. The only check that has been found by scientists working against this plague is to chop down and burn the trees the moment tests have shown them to be infected.

The Dutch Elm disease first appeared in 1920 in Holland. It waged a destructive war against European elms and then proceeded to cross the ocean in the holds of ships carrying elm logs for the furniture industry.

It made its first appearance in a flank attack in Ohio 3 years ago, but not seriously, as only nine elms were felled and immediate action checked further damage.

Zinc is a necessary part of animal diet, Drs. Gabriel Bertrand and R.C. Bhattacherjee have reported to the Paris Academy of Sciences.

Their conclusion is based on studies of mice. Baby mice as soon as they could be separated from their mothers were divided into two groups. To one group was given food entirely free from zinc, to the other the same food to which a minute quantity of zinc had been added, 1 part in 50,000.

The first group did not thrive from the start. They became thin, emaciated, lost their hair, and died from various ailments after an average life of 17 days.

The second group survived for an average life of 64 days. Postmortem examinations of this group showed that about a fifth of the zinc administered had been incorporated in the body tissues.

All the mice had the proper amount of vitamins. But without zinc they quickly died.