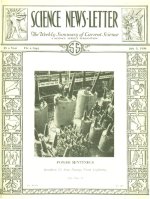 When hundreds of thousands of horsepower traveling with the speed of lightning are instantly halted, you may be sure there will be a grand disturbance. And there is, but all the fuss is confined in steel tanks 25 feet tall and 10 feet wide, filled with oil.

Two such tanks are shown on the front cover of this week’s SCIENCE NEWS-LETTER. They are said to be the largest oil circuit breakers in the world, and the picture shows them being tested by the Westinghouse Electric and Manufacturing Co. They will soon be interrupting power on a 220,000-volt transmission line in New Jersey.

When all is well on the power line, each will allow 600 amperes of current to flow through it. But when a thunderstorm sends a big rush of current down the line to them, which if allowed to pass would damage transformers and generating apparatus, they will instantly open the circuit. In this way they can break an arc of 8,000 amperes at 220,000 volts, or 3,000,000 arc kilovolt-amperes.

Such an arc would flame high in open air, melting its contacts and burning nearby apparatus. It would not be stopped in time to save the transformers and generators. But the flame is quenched in each breaker by 22,000 gallons of highly purified oil.

EVERY STAR A CELESTIAL FURNACE

Temperatures of 40 million degrees Centigrade (about 70,000,000 degrees Fahrenheit) will be required before man can release the energy of the atom, a release that is continually occurring in the stars and keeping them going. So members of the World Power Conference were told by Sir Arthur Eddington, famous Cambridge University astronomer.

Every star is a celestial furnace, declared Sir Arthur. It is fed by subatomic energy. He expressed the belief that the source of this energy is the continual building up of complex elements out of hydrogen, the simplest of the elements. According to his theory, there is a process going on deep within the stars by which the primitive electric charges are evolving into atoms. Another possibility for the source of stellar energy, he admitted, is the annihilation of the electrons and protons of which atoms are made. As one is negative electricity and the other positive, the union of an electron and a proton would eliminate each and result in a burst of light or other electromagnetic radiation.

In case you should be overcome by gas, or for some other reason should cease to breathe in the natural manner, it would now not be necessary for a physician or attendant to work for hours inducing artificial respiration by the old-fashioned hand pressure on the lungs.

A tireless mechanical breathing apparatus, which will operate for days to keep oxygen in the lungs of the person who has been overcome by water or gas, was exhibited at the recent meeting of the American Medical Association.

The apparatus was designed by Philip Drinker and L.A. Shaw of the Harvard School of Public Health. In emergencies the old prone-pressure method of starting breathing in a patient who has been suffocated or rescued from drowning will still be used. The new apparatus is intended for those cases in which artificial respiration must be kept up for days at a time.