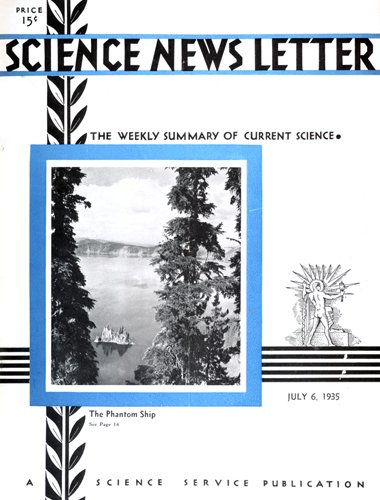 Resting at anchor on a sapphire sea, the Phantom Ship is a natural formation of beauty that will draw visitors from many miles away to Crater Lake in Oregon this summer.

The rocky formation gains its name from the conditions that make it difficult to see it in certain lights when its lava heights blend with the nearby crater walls. The photograph on the cover of this week’s Science News Letter was taken by Charles H. Simson of Ft. Klamath, Oregon.

CURE FOR CANCER MAY BE FOUND IN DEFENSIVE DIET

The real “cure” of cancer is to be achieved by reestablishing the body’s defenses against malignant growth, predict Drs. J. Maisin and Y. Pourbaix of the Cancer Institute of the University of Louvain.

The means of accomplishing this—suitable diet or possibly chemicals obtained from certain animal organs—are indicated by studies just reported in The American Journal of Cancer (June).

For the present, cancer patients cannot hope to be cured by diet. They must still rely on surgery, X-rays, or radium. The work of the Belgian scientists is still in the experimental stage, and their results, promising though they seem, have been obtained only with mice suffering from one form of cancer. The studies are not reported as a cure for cancer but as a signpost for scientists, pointing what seems to be a logical and promising way to an ultimate cure of cancer.

Forty years after it was first sighted, Harvard astronomers have pierced through the intervening “star dust” and taken observations that prove that the obscure stellar object known only by its number—I.C. 342—is really the third-largest spiral nebula now known.

I.C. 342 turns out to be a great island universe that covers an area of the sky about as large as the full moon. Because it is almost a million light years away, however, its actual diameter is nearly 10,000 light years.