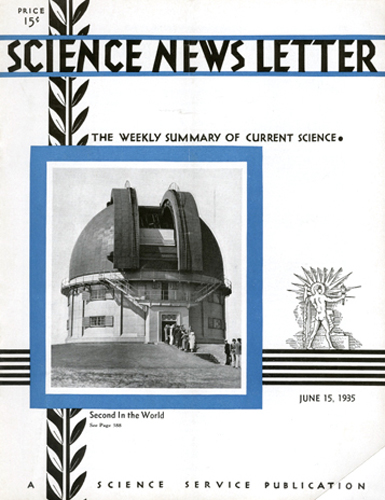 Paving the way for new advances in astronomy’s knowledge of the architecture of the universe, the David Dunlap Observatory was officially opened on Friday, May 31, the seventieth birthday of its director, Dr. C.A. Chant, whose lifetime has been spent in fostering Canadian astronomical development.

Presented to the University of Toronto by Mrs. Jessie Dunlap as a memorial to her late husband, an enthusiastic amateur astronomer, the observatory, located 15 miles north of Toronto, contains the largest telescope in the British Empire and at the present time the second largest in the world. It is a reflector, with a 74-inch concave mirror. The observatory is shown on the cover of this week’s Science News Letter.

New proofs of Einstein’s law that mass and energy are the same thing in different forms has been evolved by Prof. H.A. Bethe of the Cornell University department of physics.

The Cornell work removes an obstacle from one of the most important advances now under way in science, the investigation of the atomic nucleus. In the disintegration of the lightest elements, such as deuterium and lithium, the loss of mass was offset by an equivalent amount of energy, thus confirming Einstein’s law.

Apparent contradiction to this law had arisen when investigators disintegrated heavier nuclei, such as beryllium and boron. Not enough energy seemed to be given off when these elements were disintegrated. This cast doubt on the validity of the Einstein formula and caused consternation in this field.

Starting from the point that most nuclei disintegrate into helium, Dr. Bethe suggested that the mass of the helium nucleus was greater than previous measurements had indicated.

He was able to compute the atomic weights of all light elements to a greater accuracy than any previous method in chemistry or physics had given. With these more accurate masses, Einstein’s law was found to hold for every nuclear disintegration thus far investigated.

EPILEPSY IN MICE MAY GIVE LIGHT ON HUMAN DISEASE

Inheritance of some forms of epilepsy in humans may be explained as a result of the discovery of hereditary epilepsy in a species of American mouse, it is suggested by Dr. Lee R. Dice of the Museum of Zoology at the University of Michigan.

Dr. Dice has just reported his discovery that epilepsy is a hereditary trait in the species of mouse known as Peromyscus maniculatus artemisieae and found in Franklin County, Washington.

A typical epileptic fit occurs in this mouse when it is subjected to sudden or disagreeable sounds or a change in surroundings. Sometimes the fit is severe enough to kill the mouse. The mouse is probably born with some faulty development of the nervous system that makes it impossible for the animal to adjust to unusual conditions that would not affect ordinary mice, Dr. Dice explains.

Further study of the disease in these mice will, Dr. Dice hopes, shed light on the inheritance of some forms of human epilepsy.