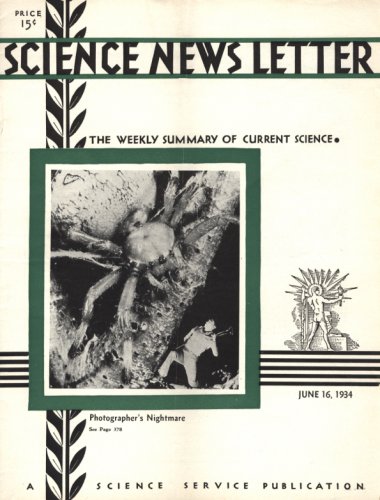 Romancers with a modicum of training in science and much more than a modicum of imagination have for many years made a favorite theme of the situation where insects, or spiders, or other “little monsters of the world of grass” have suddenly grown to human or superhuman size, bringing up with them, correspondingly magnified, the strength, the appetite, the fierceness, the other qualities that so impress us when we see them “in the little.” Thus, a man-size ant drags off a string of freight cars. A man-size spider devours half-a-dozen cows. A man-size pinching-bug routs a company of soldiers. H.G. Wells in his earlier stories, like “Food of the Gods” and “War of the Worlds”, did this kind of thing very well; he had plenty of forerunners and has had plenty of successors.

Slim Prince Hal could case himself in plate armor and still swing a heavy sword, but poor fat Falstaff would have had much ado just to support the steel tonnage that would have been required to encompass his huge girth, even if he could have plucked up courage enough to follow his Prince into battle. So, the weight of the shell alone, that is at once support and protection for the insect’s body, puts a limit to its possible increase in size.

The limit becomes emphasized when the shell is lacking, as it is on the belly of the spider shown in the fanciful combat depicted on this week’s Science News Letter by Lynwood Chace, nature photographer. Most of the spiders (which, of course, are not insects) have shell-skeletons only over their legs and head-chest region. The big abdomen, which must be left free to expand as the crop of eggs matures, is covered only with a relatively thin skin. It is kept in shape mainly by the internal pressure of its contents, like a ripe gooseberry.

ITALIAN DISCOVERY MAY BE FIRST OF SUPER-ELEMENTS

Has a super-uranium, the first of a series of elements heavier than the recognized 92 chemical building blocks, been discovered?

Scientists are wondering as a result of the report that Dr. Enrico Fermi, brilliant 32-year-old physicist of Rome’s Royal University, by atomic bombardment has created artificially a new element, No. 93. He bombarded uranium, heaviest of elements, with the nonelectrical particles known as neutrons.

Element No. 93 makes a bid for recognition as the result of this year’s fast-moving development in knowledge of the atom’s interior, which began with the discovery of artificial radioactivity.

The huge skull and jaws of a newly discovered type of triple-horned dinosaur, a monster four-legged and dragon-tailed reptile that grazed in the lowlands of eastern Wyoming more than 60 million years ago, has just been placed on exhibition at the Museum of Comparative Zoology at Harvard University.

The skull is 58 inches in length and 53 inches in width, and is believed to have been part of a dinosaur estimated to have been about 18 feet long and 10 feet high. Technically known as Triceratops eurycephalus, (wide-headed), the reptile represents the last recorded survivor of that great group known as Ceratopsians.