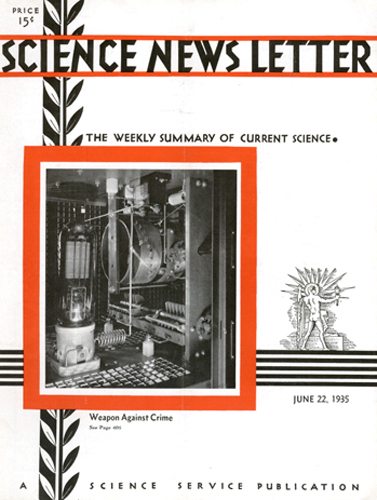 Police are not concerned with the beauty of their weapons against the criminal world. But beauty is nevertheless present in the camera view of the 100-watt radio transmitter for police use depicted on the front cover of this week’s Science News Letter.

The transmitter was designed by the Bell Laboratories for the Western Electric Company.

A new vitamin that is essential for liver function and that may play an important role in controlling diabetes was described at the meeting of the American and Canadian Medical Associations by one of its discoverers, Dr. C.H. Best of Toronto, codiscoverer of insulin, the life-saving remedy for diabetes.

The new vitamin has a real name, choline, instead of a letter, as do most other members of the vitamin family. It is found in many foods, but the best sources are meat, egg yolk, and yeast.

Dr. M. Hershey and Miss M.E. Huntsman, of the University of Toronto, were responsible for many of the fundamental observations that led up to the discovery of the significance of choline, Dr. Best stated.

Lack of this vitamin causes the serious condition of fatty liver, Dr. Best said. When the liver becomes fatty, it fails to make sugar or handle bile or do many of the things it should do, he explained.

The vitamin was discovered in the course of insulin investigations. Dogs that had no pancreas, the insulin-secreting organ, failed to live for more than a few months, even when given insulin injections. When they were fed minced pancreas, in addition to the insulin, they lived for years.

However, chemical studies of the pancreas showed that in addition to producing insulin and a digestive ferment, this organ contained choline, and that it was the choline in the diet of minced pancreas that kept the dogs alive after they had lost their own pancreases.

Equations for angel cake are the latest aid for bakers in high altitude where the reduced air pressure influences cake dough and makes pastry tough, grainy, soggy, coarse, or any of the other “disasters” known to housewives.

Speaking at the meeting of the American Association of Cereal Chemists, Mark A. Barmore of State Agriculture College, Fort Collins, Colo., described new tricks in baking wherein cakes are made mathematically and tenderness is tested mechanically.

Tenderness in angel food cakes, Mr. Barmore reported, increases with altitude and with sugar content of the cakes; and it decreases with increasing amounts of flour and egg-white content.

Just as it is difficult to boil eggs on a mountain top, because water boils at a lower temperature due to the reduced air pressure, so too does altitude affect baking. For one thing, the dough has a greater expansion during baking and the temperature inside the cake falls.

To mechanically-minded bakers, tenderness is known as tensile strength, the same term that is used to indicate the structural strength of steel.

Mathematical equations are now available, Mr. Barmore reported, that link the effects of ingredients and altitude with dough’s tensile strength from sea level up to 15,000 feet.

With one-third of all the United States at heights where altitude affects baking, and with 5 million people dwelling in this area, the baking equations are not as meaningless as they may sound at first.