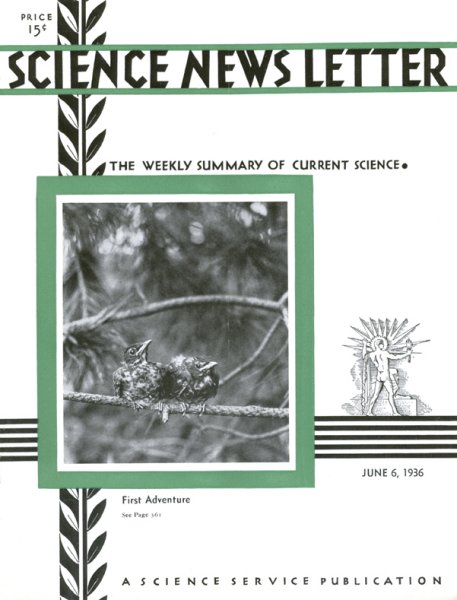 Just a couple of young robins, big enough to leave the nest but not quite ready yet to “go it alone” in the wide world, provide the subject for the front cover illustration of this week’s Science News Letter. They hang on to their twig with all the grip there is in their small toes—for there may be a cat on the ground. The photo is from the camera of Cornelia Clarke.

CHANCE IN MILLION ANOTHER PLANET WILL DAMAGE EARTH

The chances were only about one in a million that the famous baby planet, Anteros, would strike an inhabited portion of the Earth when it made an unprecedented close approach of 1.2 million miles to the Earth last Feb. 7.

Astronomers and laymen can be reassured by the calculations Prof. C.H. Smiley and Ward Crowley of Brown University reported (Science, May 8) which provide an antidote to the “sad stories of what might have happened if the planet had struck the Earth.”

Only 16 of a million bodies coming to within a million miles will strike the Earth, their figures show, and about 73 percent will fall in oceans or seas and 23 percent in sparsely inhabited territory. Thus, only one in a million is likely to do damage.

It is impossible to predict just where the little planet is going and when it will return to the Earth’s neighborhood, because it will be pulled about by other planets as well as the sun. If the sun were its sole gravitational attraction, it would come back close to Earth in 1938. But the Brown University scientists counsel: “Don’t worry too much about your safety on Earth.”

Suppose the little planet, about the size of a small earthly mountain, did hit. It is fortunate that it is moving around the sun in the same general direction as the Earth and would not hit head-on. With a rear-end collision the relative speed would be only 4 miles a second (14,400 miles per hour) instead of the 40 miles per second (144,000 miles per hour) for a real head-on conflict.

A watch designer, in order to facilitate his work, may construct a model several times larger than the finished timepiece will be.

How convenient it would be for the organic chemist if he, likewise, could enlarge the molecules with which he deals to a size of several inches. Instead then of vainly attempting for months to prepare a certain compound, he could have seen at the outset that the method he was using could not possibly lead to the desired result.

The organic chemist is always anxious to know just how closely atoms or groups of atoms, appearing in the molecules of a compound, approach each other in space. With this knowledge he could foresee whether or not certain phenomena would take place.

To represent organic molecules correctly, models should be composed of spheres made to the scale of the atoms with a properly chosen magnification. Moreover, the spheres should not be separated by rods as are those in the old-type models.

This has been fully realized by Dr. Robert E. Steiger of Swarthmore College. His “Organospheres” are 172,410,000 times the actual size of the non-metallic atoms one is most likely to find in organic substances. Made of solid aluminum, they can be connected to each other, at specific points (“valence points”) on their surfaces, by means of pins that are no longer visible once the connection has been effected.