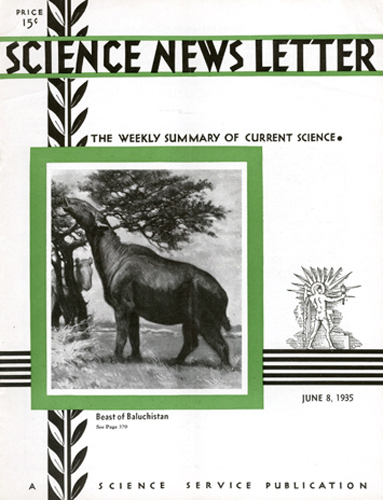 The Titan-Beasts, or Titanotheres (Greek, meaning exactly the same thing) were big creatures, requiring plenty of legroom. It is appropriate therefore that our first knowledge of them came from the great open spaces of the American West—the plains and mountain plateaus of Wyoming, Dakota, and Nebraska. From these regions came first fragmentary bits of massive bones—some of the first pieces nearly 100 years ago. Later, museum expeditions began excavating whole bones, and more-or-less complete skulls, and considerable parts of skeletons.

The restoration painting reproduced on the cover of this issue of the Science News Letter was made some time ago by Charles R. Knight, under the direction of Prof. William K. Gregory. Subsequent researches have necessitated some modifications in detail, though the main outlines are correct.

Spectacles with inverting lenses that would turn everything seen upside down and produce right-left reversal were worn continuously for 2 weeks by Dr. Joseph Peterson, psychologist of George Peabody College for Teachers, in an effort to test out why we see things as we do.

He wanted to know whether his eyes would become accustomed to such an Alice-in-Wonderland world so that objects would appear to him as right side up again, or whether he would have to go through the process of learning how to handle objects and how to move about so as to miss obstacles and touch desired things. Manipulation or other direct contact with objects in the optically artificial environment was found to be necessary as a basis for recognition of the objects.

In normal vision, the images of objects about us are turned upside down on the retina of the eye just as they are on the focusing glass and on the negative of a photographic camera. But we really see in the brain rather than in the eye. How these images are set right side up again by the perception is something that has long been a puzzle to scientists. Some contend that the organism after practice will correct for this inverted vision. Others have thought that we learn by handling objects which way they are standing and come to interpret our vision in such a way that it fits in with the experience of our other senses.

Ethylene gas, widely used to blanch celery, bring the glow of ripe color to the skins of fruit, and otherwise hasten the maturing of garden products, is actually generated by plants in the natural process of maturing for the market. Such are the indications of researches conducted at the Minnesota Agricultural Experiment Station by R.C. Nelson and R.B. Harvey, and independently at the Low Temperature Research Station at Cambridge University, England.

In their experiments, Nelson and Harvey used young tomato plants as “indicators” for the gas. The response of a tomato plant to ethylene is characteristic. It arches its leaves downward.

These “indicator” tomato plants were put into closed glass vessels. Into similar vessels quantities of a self-blanching variety of celery were introduced. After 2 hours, the gases from the celery vessels were drawn into the glass prisons of the tomato plants. The leaf-stems of the latter curved downward strongly, showing that a compound with the physiological effects of ethylene was produced by the celery.

In a parallel test, using a nonblanching celery variety, the tomato plants did not respond: No ethylene was being produced.