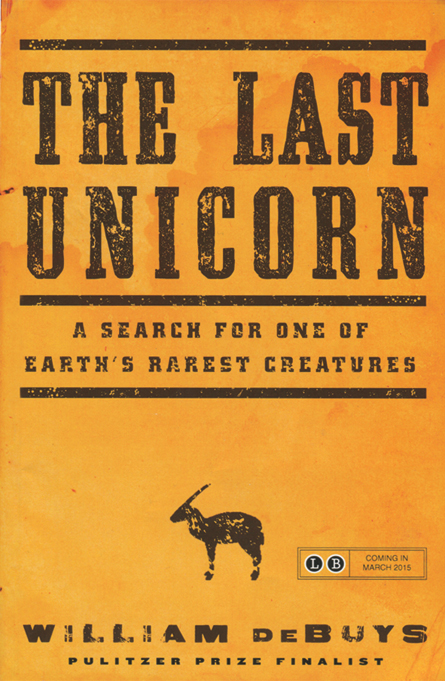 Long, beautiful horns. A sturdy but svelte figure. Extremely elusive. In The Last Unicorn, nature writer William deBuys rekindles our love affair with unicorns by introducing readers to the saola. In many ways, these creatures are like unicorns, except that saola actually exist.

DeBuys takes readers on an expedition as he tries to become one of the few people to have seen a living saola. Among the rarest mammals, the antelope-like animals, Pseudoryx nghetinhensis, live deep within forested mountains of Laos and Vietnam. When scientists saw horns on a hunter’s wall in 1992, a race began to capture and study the animals.

One captive was Martha. She was calm and patient, letting Bill Robichaud, a no-nonsense field biologist, pick ticks from her ears and stretch a tape measure around her. She was 152 centimeters long and carried 43-centimeter-long horns. Martha was chocolate brown, paled at her neck and belly, and sported a black stripe along her back and fluffy tail. She had bold splashes of white across her face. (A video of Martha is available online.)

Despite deBuys’ detailed descriptions, he never actually saw Martha. She died in 1996, not quite three weeks after being captured. The locals who had cared for her then cooked and ate her. The other dozen or so captive saola lived similarly short lives, leading local governments to make capturing them illegal.

Frustrating to scientists, saola in the wild are exceedingly private. They rarely wander in view of cameras set up to observe them. Even today, it’s not clear how many of the animals roam in the Annamite Mountains, but it’s estimated to be fewer than 750.

Saola’s elusiveness led Robichaud and deBuys on a search in 2011. With local guides, the two relied on nearly every means of transportation imaginable to get deep into the woods. Drama ensued when the team spent days on daunting hikes and a few in the group pilfered food rations from their own team members.

The Last Unicorn is an easy read at times, dense at others, and driven by the question of whether deBuys sees a living saola. Read it and find out.

Buy The Last Unicorn from Amazon.com. Sales generated through the links to Amazon.com contribute to Society for Science & the Public’s programs.