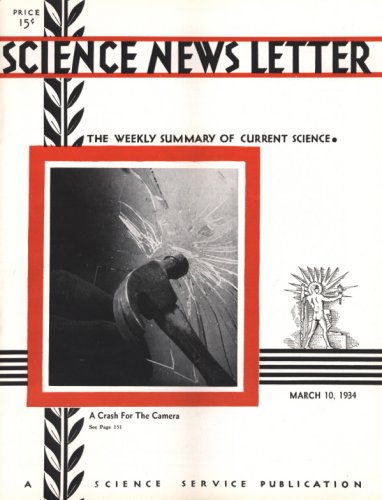 A CRASH FOR THE CAMERA

A high-speed photograph of what happens when a hammer and a pane of glass meet is reproduced on the front cover of this week’s Science News Letter.

This picture was made by Prof. Harold E. Edgerton and Kenneth J. Germeshausen of the Massachusetts Institute of Technology at an exposure of 1/100,000 of a second. The camera caught the scene at the moment of impact when the fragments of glass were about to separate.

All the newly discovered particles of physics—deuton, positron, and neutron—cooperate in one grand experiment to produce a new case of the remarkable artificial radioactivity discovered in Paris a few weeks ago.

It was found at the California Institute of Technology, Pasadena, that when deutons, which are heavy hydrogen nuclei, are driven at carbon atoms by a high-voltage tube, positive electrons are produced in great numbers. It is known that neutrons are also formed. But in this case, they are not the center of interest. The positive electrons attract more attention because they continue to shoot out from the carbon for many minutes after the deuton bombardment is stopped. Their number drops 50 percent every 10 minutes.

Prediction of earthquakes a few hours before they occur may be possible in the future as a result of studies that have been made in Japan, Capt. N.H. Heck, chief of the U.S. Coast and Geodetic Survey’s division of terrestrial magnetism and seismology, declared before the Brooklyn Academy of Arts and Sciences.

In a number of earthquakes there was perceptible tilt of the ground several hours before the earthquake, Capt. Heck said. In one case, the villagers observing the tilt, feared a tidal wave and took to the hills. The tidal wave and earthquake came later.

A new machine for measuring tilt of the ground has been invented by George E. Merritt, formerly of the U.S. Bureau of Standards, and installed in California through the cooperation of the U.S. Coast and Geodetic Survey and the University of California. This apparatus is expected to throw new light on California’s earthquake problems. Tilt on a large scale and the creep of the Earth’s crust, known to be a factor in earthquake production, can be detected through triangulation and leveling, such as is being undertaken by the Coast and Geodetic Survey.

Prediction of earthquakes, however, lies in the future, Capt. Heck emphasized. We now have, he said, no possibility of prediction beyond indicating whether or not a certain region is likely to have an earthquake in the not too distant future.