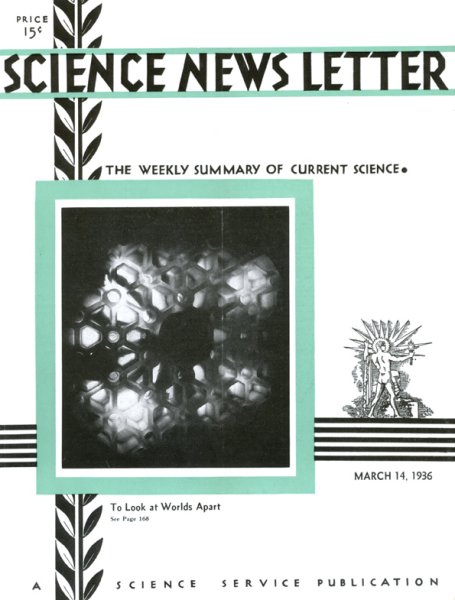 Light softly suffused through the great 200-inch disk for the world’s largest telescope gave the photographer a rare opportunity to show its beauty.

The tricky problem of moving this important and delicate astronomical treasure from the Corning Glass Works in Corning, N.Y., to California, is giving engineers, scientists, and designers an unusual task. First protecting layers of felt and rubber, then a great sheet steel housing reinforced by steel beams, were part of the “crating” which alone weighed 15 tons. A specially constructed freight car was needed, and this attached to a special train.

For this unusual train, high speed will not be required nor desired. And as it slowly moves across the continent, instruments will record any unusual vibrations.

Deadly danger for young research workers in physics lies in wait in their own laboratories, if they work with powerful new atom-smashing machines using streams or rays of neutrons.

Neutrons are the uncharged particles of matter that can be knocked out of the cores of atoms. They are widely used as atomic “bullets” to pierce the inner nuclei of other atoms and are capable of effecting transmutation of the elements and synthetic radioactivity.

Warning of the potential danger in using such neutron rays is drawn from the results of two investigations on their biological effects, which have just been published (Proc. Nat. Acad. Sci., February). The neutron rays appear, in summary, to be 10 times more potent than X-rays in what they can do to the body.

Exposure to neutron rays was deadly to white rats. They grew sick, miserable-looking, humped-up, and died. The rays were apparently bad for them “all over,” but as a quantitative measure of their effect, the decrease in the number of the necessary white blood corpuscles in their blood was counted. It was found that destruction of white blood cells was as great from a given dose of neutron rays as it was from a 10 times more intense dose of X-rays, heretofore counted among the really dangerous scientific tools. The effects of neutron rays on growing plant tissue were found by Drs. Zirkle and Aebersold to follow about the same ratio: Neutron rays are 10 times as dangerous as X-rays.