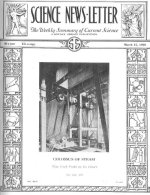 One of the three largest boilers in the world is shown on the front cover. The boilers were recently installed in the East River station of the New York Edison Company to run the largest single-unit electric generator in the world.

If this 215,000-horsepower turbo-generator had been developed in 1906, it could have supplied all current used for lighting in the United States.

The picture, taken before the boiler was bricked in, shows a part of the 23 miles of tubing each contains. There are 3,786 separate tubes and 10 drums. The boilers are as tall as an eight-story building. With their auxiliaries, the three cost $5,500,000.

A thousand tons of coal are required each day to operate one at full capacity. A unit in a recent test changed 156,250 gallons of water per hour into steam at 425 pounds pressure and 750 degrees Fahrenheit.

EARTH MAY HAVE COMET-LIKE TAIL

Streaming out from the Earth on the side away from the sun, there may be a sort of comet-like tail, which we sometimes see as a faint patch of light called the “Gegenschein,” or “counter-glow.” This is the suggestion just made by Dr. E.O. Hulburt of the Naval Research Laboratory, in a report to the American Physical Society on the nature of the zodiacal light.

This light can usually be seen on a dark, clear night after twilight has gone. It appears as a faint beam of light extending upward from the western horizon along the ecliptic, the path of the planets. In the spring, when the ecliptic is almost vertical in the evening, it can best be observed. Near the horizon it is brighter than the Milky Way. In the early morning, before dawn, it can also be seen, extending upwards in the eastern sky. The generally accepted theory of its origin, in recent years, has been that it is caused by sunlight reflected from a mass of tiny bodies, each moving in its own orbit around the sun. The “Gegenschein,” seen in a dark night sky as a faint patch of light directly opposite the sun, was supposed to be due to a concentration of these small particles about a million miles from Earth on a line with the sun and Earth, as a result of the gravitational attraction of these two bodies.

Broadcasting with 200 kilowatts of power, four times as great as the highest- powered regularly licensed station, was successfully accomplished by Station WGY of the General Electric Company, Schenectady, N.Y., on Sunday, March 9. Using a special experimental license, with the call letters W2XAG, the highest power ever used in broadcasting was put on the air at 4:00 a.m. eastern standard time. Experiments were continued for seven days at the same hour, which was chosen to prevent possible interference with other stations of the country.