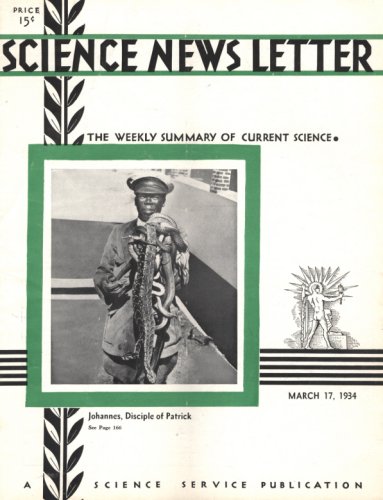 St. Patrick was probably not even a legendary name to Johannes, at least until he left his native Basuto village and came to town to be “king” at the Port Elizabeth Snake Park. But if the great space-time gap that separates ancient Ireland from modern South Africa could be bridged, Patrick and Johannes might find at least one congenial topic in common.

For Johannes has no fear whatever of snakes, is a veritable genius at handling them, and appears to be quite immune to the venom of the deadliest of them, although he has been bitten 13 times. Visitors at the park get a shuddering thrill out of watching him drape an assortment of South Africa’s wickedest serpents all over himself, with no ill consequences.

On the cover of this issue of the Science News Letter. Johannes is shown in such a pose. The snake most prominently displayed is an African puff adder, one of the most poisonous and at the same time most widely distributed of African serpents. The head of a second puff adder shows alongside that of its companion.

How fast does a thunderbolt travel? This question has been answered by Dr. B.F.J. Schonland of the Cape Town University and H. Collins of the Victoria Falls and Transvaal Power Company.

Using a camera provided with two lenses revolving in a circle at opposite ends of a diameter, an arrangement described by C.V. Boys in 1926, the two experimenters photographed a number of lightning strokes between Earth and cloud. A moving lens tilts the image of a lightning flash on the plate much as a focal plane shutter causes a swiftly moving automobile to seem to lean forward. The other lens, moving in the opposite direction, tilts the image the other way, so that the real angle of tilt is found as half the angle between the two images. Knowing the speed of the lenses, which made 1,500 revolutions per minute, the experimenters could find not only the duration of the discharge, but which way it was going and how fast. They could also determine how long the luminosity persisted after the discharge had ceased, and other details.

Almost always, they found, the main flash was preceded by a fair “leader,” as they call it. This traveled downward from the negatively charged cloud to the positively charged Earth. As soon as it struck the

Earth, the main flash started upward from the same spot, and followed exactly the same path that the leader had taken, to the cloud.

The leaders were invariably thin, of uniform width, and unbranched. Their speeds ranged from 810 to 19,900 miles per second. They averaged 5,150 miles. The length of the strokes observed varied from 1.6 to 4.7 miles. The longest time occupied by a leader stroke was 1,670 microseconds for a 4.7-mile stroke. The quickest flash took 69 microseconds to travel 3.5 miles. A microsecond is one-millionth of a second.

The space between the nebulae is a million times bigger than the space occupied by the nebulae. Yet one might say space is crowded with nebulae compared with the sparseness with which the stars are contained in the nebulae.

This is one of the astronomical facts recently presented by Dr. J.A. Anderson of the Mt. Wilson Observatory in a popular discussion held under the auspices of the Astronomical Society of the Pacific.

The average distance between stars in a nebula like our own galaxy, the Milky Way, is millions of times bigger than the diameters of the stars. This means that the nebula is a thousand billion billion times as big as the sum of all the stars in it. And there may be some hundreds of billions of stars in one nebula.

Thus, a nebula is emptier than ordinary air. If the molecules in a thimbleful of air were strung together side by side, the string would go 30 times around the earth. If a similar string of stars were made, it would extend only one-seventh across the nebula.