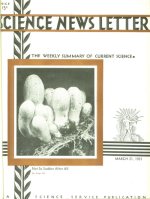 Quick as a mushrooms growth, is the phrase we like to apply to sudden and unexpected developments. An oil town, a stock-market fortune, the reputation of the writer of a hit, are all referred to the mushroom standard of comparison.

Yet the mushroom is no creature of magic, not-here yesterday and here today. The sudden manifestation that startles and fascinates us is only the fruition of months, perhaps years, of unseen preparation under ground, like the age-old waiting pool, the slow ripening of economic forces, the years of obscure labor behind the composer or playwright. A cluster of mushrooms can easily be as old as a forest of trees. Only until its time comes, it lives wholly as a concealed mass of white threads in the dark mold.

The picture on the cover of this issue of the SCIENCE NEWS LETTER, made by Cornelia Clarke, betrays a bit of the mushrooms secret. It was taken in natural size just at the dramatic moment, when the buttons, slowly swelling after weeks of feeding by the mycelial mass, are ready to leap forth and claim a place in the sun.

Audible sound waves, so high-pitched and so intense as to be best described as a terrific squeak, have been used to kill bacteria by Prof. O.B. Williams of the University of Texas, bacteriologist, and Prof. Newton Gaines of Texas Christian University, physicist.

Sound waves of much higher pitch, so high as to be wholly inaudible, have in the past been used with fatal effect on living things, the pioneer experiment in this field being performed at the private laboratory of Alfred L. Loomis, banker-scientist of Tuxedo Park, N.Y. But the Texas experiments were the first in which audible sound waves were shown to be effective.

Radio reception has been noticeably impaired coincidentally with the appearance of plentiful spots on the sun, Dr. Harlan T. Stetson, director of the Perkins Observatory, Ohio Wesleyan University, Delaware, Ohio, has observed.

Previous to the recent rise in sunspots, radio reception was the strongest ever recorded in several years of research undertaken by Dr. Stetson and his colleagues.

The recent rise in sunspots reported by Mt. Wilson Observatory in California was anticipated by Dr. Stetson on the basis of the 15-month cycle in spots that he recently discovered. The increase arrived exactly on schedule.

Dr. Stetson expects the sunspots to decrease after about April first and then radio reception will become as good or better than it was before the present sunspot outbreak.