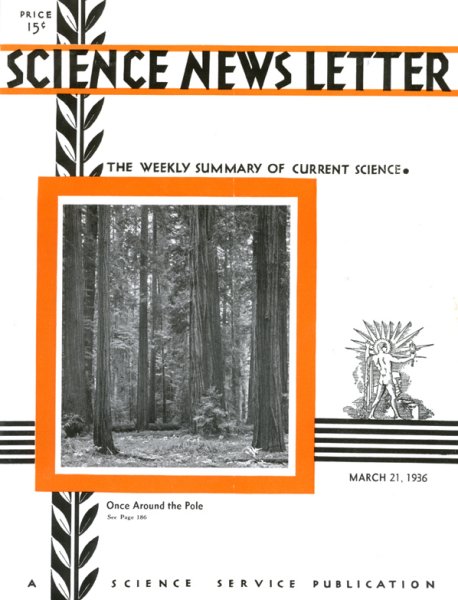 Forests that grew ages ago in the lands around the North Pole were never tropical, as old-time natural history books used to say. For theoretical reasons, they couldn’t have been. And when the theory is checked up by examining fossils from the Far North, the fossils give strong evidence that the theory is right. Thus another favorite notion of our younger days is outlawed to the limbo of facts that have been turned into fictions.

Not that there never were any forests around the North Pole. There were; great and luxuriant ones, if the wealth of fossil leaves and other plant parts is any indication. Where the tallest trees are now little willows 6 inches high, in such places as the islands north of Canada and Siberia, there were once woods as pleasant as any to be found in Ohio or Oregon. But the point is, they were such woods as can be found now in Ohio or Oregon, or perhaps Georgia and Arkansas, and not such jungles as those of Brazil or Burma, as was once imagined.

The destruction of the myth of the arctic tropics is the result of the rubbing together of two scientists’ minds. Both of the men are Johns Hopkins professors, and both are interested in plants, though in widely different phases of plant affairs. One is the Dean of the University, Prof. Edward W. Berry, whose scientific specialty is the study of fossil plants of the long ago. The other is Prof. Burton E. Livingston, plant physiologist, who pries into the life processes of plants now in existence. It was Prof. Livingston who set off the theory, and Dean Berry who checked it up by looking over the fossil records, and found it was so.

Wheeled in on a stretcher, a coal-grimed janitor suffering from apoplexy appeared before a clinic of the American College of Physicians meeting and helped his physician emphasize facts about high blood pressure.

The moral of the janitor, said Dr. O.H. Perry Pepper of Philadelphia, is that certain people are better off with high blood pressure than when it drops to a lower and more normal level.

You could see the coal-grime stains on the janitor’s hands as Dr. Pepper held up his arms to show the arteries. A week before, the physician explained, the janitor had dropped to the floor while shoveling coal, stricken with apoplexy. For 10 years insurance medical examiners had noted a high blood pressure in the janitor. Yet when he was brought to the hospital his blood pressure was down to a low level. Nevertheless, he was suffering.

“Be brave,” said Dr. Pepper to his colleagues, when patients of this type are encountered, and try to raise the blood pressure when it is low, providing it is known or suspected that such patients normally are among the high blood pressure group.

The lesson Dr. Pepper gave was that the person with high blood pressure should be kept from getting tired out physically, should be protected from nervous or emotional shock and from worry, and should go to bed and take care of himself for every illness, even a cold. Any of these conditions, worry, shock, infection, prolonged physical exertion, lower the blood pressure in normal persons, and in those with habitual high blood pressure, the drop may be dangerous.

Another thing for the person with habitual high blood pressure to guard against is overeating. Dr. Pepper said the older doctors who diagnosed as acute indigestion the condition now diagnosed as a certain form of heart attack—coronary thrombosis is the technical term—were probably right. The person with habitual high blood pressure generally has hardened arteries; “rusty pipes,” Dr. Pepper called them. If he “makes a pig of himself” by overeating, he gets a drop in blood pressure, meaning that the blood isn’t pumped at a high-enough pressure to circulate through the arteries. Then a stoppage or thrombosis occurs in “that artery best prepared by the rust for the plumbing to stop.”

Another new technique that doctors now use to combat high blood pressure that cannot be reduced by medical means is to operate on certain nerve paths to the brain. Dr. Max Peet of the University of Michigan described the operation. He was talking about patients different from the janitor example of Dr. Pepper.

RADIO TUBE WITHOUT FILAMENT AID TO RADIO AND TELEVISION

A new type radio tube without a filament and having potentialities in the development of television and the design of lightweight radio transmitters for aircraft was shown for the first time publicly before the meeting of the Institute of Radio Engineers by Philo T. Farnsworth, Philadelphia radio and television engineer.

The new radio tube is of the cold-cathode type and is known as the Multipactor. The operation of the tube, said Mr. Farnsworth, is based upon the harnessing of so-called secondary electrons which are emitted by certain metals when bombarded by other electrons inside the tube.

Enormous currents are thus quickly built up inside the tube, which, if left uncontrolled, would release enough electrons to be equivalent to all the electric current consumed by all the electrical apparatus in the world.