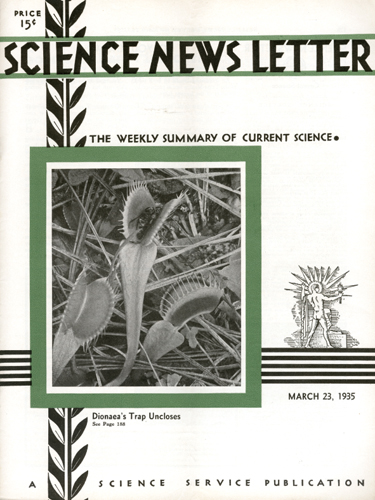 Venus’ flytrap might with equal correctness be called a spider trap. This famous insect-catching plant, once called by Darwin “the most wonderful plant in the world,” has been restudied recently by Prof. Robert F. Griggs of George Washington University. He discovered that the largest single class of animals among its victims consists of spiders. Examination of hundreds of its traplike, hinged leaves showed that spiders formed 28 percent of all its catch. Flies were a close second, with 24 percent.

Other prey included beetles, ants, and roaches. There was one tiny toad, a scorpion, a couple of snails, and one daddy longlegs. In general, the plant’s victims were mainly insects that fly little or not at all; there were few highly active fliers like bees and wasps.

Prof. Griggs made an effort to find an answer to the old question of what use the plant’s carnivorous tendencies are to it; for though it secretes a ferment like the gastric juice, it has never been proved that it uses the captured victim for food. He was not able, however, to arrive at any completely conclusive findings, for specimens grown in various types of soil, some fed and others kept without insects, all throve about equally.

It is probable that the species once had a far greater range than its present restricted area of about a 100-mile radius of semiswampy coastal plain around the city of Wilmington, N.C. Its nearest existing relative is found in Europe. Two colonies of it were experimentally transplanted into bogs far to the north of its present habitat some years ago. One of these is in Maryland just outside the District of Columbia, the other in Virginia. Both colonies survived the severe winter of 1933-34, which was far colder than anything these plants have been called upon to endure for probably thousands of years.

Prof. Griggs expressed the wish that people generally might abandon the rather awkward and unbeautiful name Venus’ flytrap and adopt the more euphonious botanical name Dionaea for common use, as they have already englished such strictly scientific names as chrysanthemum, rhododendron, and gladiolus.

One of Prof. Griggs’ photographs, taken in the native haunts of Dionaea, is shown on the cover of this issue of the Science News Letter. It shows the hinged halves of a leaf as they slowly open, disclosing the empty shell of a luckless large fly that was not quick enough to escape the snap of their traplike action. Wind or a raindrop will clear away the victim’s carcass, leaving the hungry leaves ready for another catch. In the meantime, two other empty leaves wait with deadly patience.

SOURCE OF RARE HYDROGEN ISOTOPE MADE AT PRINCETON

By “boiling down” 75 tons of water over a period of a year, 10 drops of the precious liquid, richer in the rare “hydrogen three” isotope than any ever made before, has at last been obtained by the chemistry department of Princeton University.

According to Prof. Hugh S. Taylor, chairman of the department, who described the work before the Electrochemical Society, 1 part in 10,000 of the half gram is fluid in which the hydrogen is of mass three instead of mass one, as in ordinary water.

You need not buy electric lightbulbs of extremely high wattage in the fear that use of less-powerful lights will ruin the eyesight of members of your household, it appears from a survey of research studies by Dr. Miles A. Tinker of the University of Minnesota. (American Journal of Optometry, Feb.)

Reading by lights of lesser intensity does not cause eyestrain unless the eyes are abnormal or the print illegible, Dr. Tinker declares. In fact, the contrary may be true. Lights of extremely high intensities often recommended as healthful and necessary may cause discomfort by producing glare.