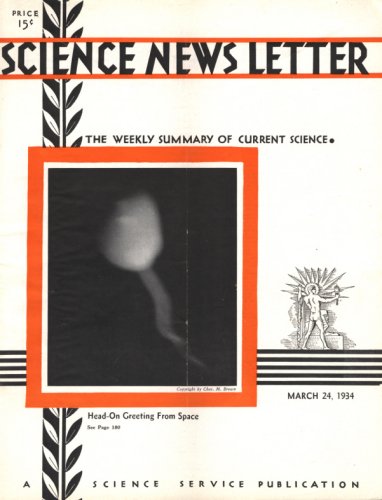 In the novel, Cranford (does anybody read that delightful old-fashioned tale any more?) a returned cousin from India, as mendacious as he is rich, tells of hunting on a Himalayan alp so high that when he fired at what he took to be a huge bird he found to his astonishment that he had “shot a seraphim.” A feat quite as astonishing was really accomplished by a New Mexico rancher, Charles M. Brown, in obtaining the photograph reproduced on the cover of this issue of Science News Letter.

This, the first general publication of Mr. Brown’s snapshot of a great meteoritic fireball, is in a way the commemoration of an anniversary, for it was just one year ago, on March 24, 1933, that the great flaming invader from outer space flared its way across the skies of the Southwest, visible to thousands of people in seven states.

Many photographs were taken of the persisting trail of the great meteorite after it had passed, but Mr. Brown’s is believed to be the only one of its head—and indeed probably the only photograph that ever caught the head of any meteorite in its flight. To get such a picture requires a combination of quickness, skill, and luck that would suffice to catch a snapshot of a cannonball. Probably nobody but a plainsman, born of a generation that survived the wild and woolly days largely through its ability to “shoot from the hip” could have taken the photograph.

Existence of triple-weight hydrogen, hitherto suspected but unproved, may be demonstrated by a sensational atom-smashing experiment just made by Lord Rutherford, Drs. M.L. Oliphant and P. Harteck in Cambridge’s famous Cavendish Laboratory and announced in Nature.

Double-weight hydrogen, now being studied intensively in the world’s chemical laboratories following its discovery in America 2 years ago, was both target and projectile in the new atomic bombardment. Hearts of heavy hydrogen, called deutons in America and diplons in England, were flung with hundred-thousand volt energy at salts of ammonia that contained heavy hydrogen instead of ordinary single-weight hydrogen. The impact of deutons upon deutons (or diplons upon diplons, to follow the nomenclature preferred by the British scientists) gave striking results.

There was enormous emission of fast protons or hydrogen hearts with energies of 3 million volts. Particles released had 30 times the energy of those used in the atomic attack.

Striking economies in motion-picture illumination are forecast in the use of a new type of metal-front mirror recently developed by Dr. Hiram W. Edwards, physicist in the University of California at Los Angeles. The new reflector, known to camera operators as the “pancro” mirror, is so called because of its panchromatic behavior. It reflects all colors alike. It also reflects light much more completely than the standard silver mirror.