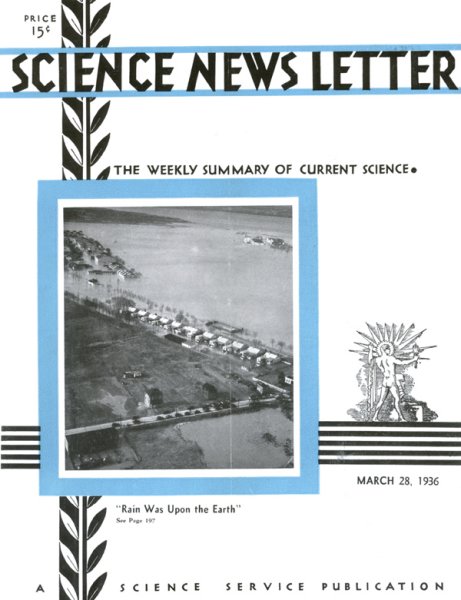 Rains gorged Eastern rivers into disastrous flood in just a few days, but behind the rains was a background of excessive snow, that lay in the mountain valleys all winter long and had the soil saturated when the rains began to fall. The new water thus could not sink into the earth, any more than it could on a thatched roof, and had nowhere to go but off.

That, in a nutshell, is the meteorological background of the recent crucial situation in a dozen Eastern and Southeastern states and all along the course of the Ohio River.

In the emergency, aviation proved its value not only for transportation, but for instantaneous, effective, and accurate estimation of the conditions existing in any locality. One of a series of aerial survey photographs made by the U.S. Army Air Corps appears on the front cover of this week’s Science News Letter. At the upper right it shows the U.S. Naval Air Station at what is usually the bank of the river. At the left is Bolling Field, army air station.

Seven million years ago, a terrific outburst occurred in the distant part of the universe that astronomers know as the “nebulae of the Virgo cluster.”

Now at the Carnegie Institution of Washington’s Mount Wilson Observatory, Calif., there has been discovered this gigantic stellar event which astronomers call a “supernova,” an extraordinary new or temporary star.

It is one of the most energetic star explosions ever recorded by astronomers, and so remote that news of its happening, via light waves, has just arrived on Earth.

So faint that the world’s largest telescope, the 100-inch on Mount Wilson, was needed to record its brief rise to fame and fall to obscurity, the supernova nevertheless at its maximum gave off 30 million times as much light as our sun.

In the brilliant explosion, the star attained a velocity of expansion of 3,700 miles a second, or more than 13 million miles an hour.

Dr. Edwin Hubble, astrophysicist of Mount Wilson Observatory, famed for his discoveries of distant galaxies of stars, and Glenn Moore, assistant on the 100-inch telescope, discovered “Supernova Virginis, 1936,” as the star will be called.

Each of them is believed to be hundreds of times larger than our entire solar system, yet they are so far distant they can be seen only through a moderately powerful telescope. Even then, the rings are not visible to the human eye but can be detected only on sensitive photographic plates, where they appear as luminous rings surrounding brilliant nucleus stars. These center stars would, of course, be visible through large telescopes.