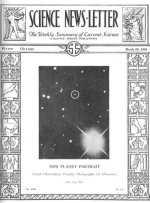 With the discovery of the planet beyond Neptune, by Lowell Observatory astronomers, many months of observation will be needed before even an approximate idea can be obtained of the orbit in which it is moving. A planet like this moves in the ecliptic, the plane in which Earth itself revolves around the sun, and to determine just where this path is, four different observations, giving its direction from Earth on four different occasions, are needed. If it were not moving in the ecliptic, three would suffice, as they do for orbits of comets.

The farther apart the positions of the planet at the times of these observations, the more precisely can the calculation be made. All the planets move in ellipses, nearly circular. To the mathematician, by the way, a circle is an ellipse in which the long and short diameters happen to have the same length. Eclipses might differ widely in shape, and yet over a small segment be very similar. Therefore, to determine their shape with any accuracy, rather a good-sized piece must be known.

The new planet is moving very slowly through space. Probably it takes nearly 300 years to travel once about the sun, so that in even a year it would cover only about a three-hundredth of the total path. Observations made of it during the next few months, therefore, will give only a rough idea of its orbit. A range of several years, at least, will be required before astronomers can get a really accurate orbit, for there is no way of hurrying it.

But there is one chance of getting an orbit sooner, and that is if a search of photographic plates made in past years should happen to show it. Photographs of the heavens have been made for about half a century, and while the early ones do not reveal objects as faint as the planet, of the 15th magnitude, some made a quarter of a century ago probably would. If it should happen that some astronomer, in some part of the world, took a plate in 1905, for instance, that showed the planet with a swarm of stars, then a much shorter time would be required to determine its orbit. If two or three such observations should be discovered, then the orbit could be accurately calculated within a few weeks. Then astronomers would know, in fact, whether this really is the ninth planet or whether, indeed, it is the tenth planet, the ninth yet remaining for discovery.

As soon as the discovery of a new planet was announced, observatories throughout the world began to look for it, seeking to be among the first to see this new addition to the sun’s family. But to find it is not an easy task. It does not differ in appearance from a faint star, so even with a telescope powerful enough to reveal objects as faint as the 15th magnitude, it might be seen but not identified. What is needed is a map showing its position, and as no such maps are yet available, an observatory must make its own by photography. No general star maps show objects so faint.