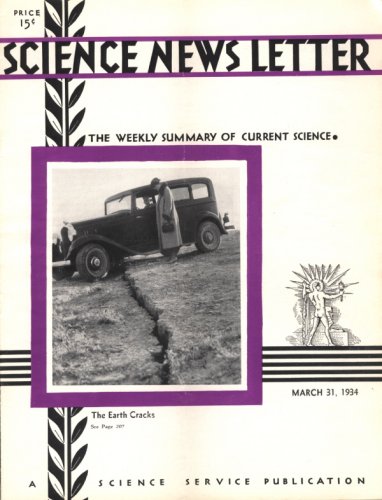 Just suppose the half-mile-long earth crack, a portion of which is pictured on the front cover of this week’s Science News Letter, had split into being beneath the business district of a big city. It was created with a shock estimated to have been stronger than the one that damaged Long Beach, Calif., on March 10, 1933.

Fortunately, its location was the desert near the northeast edge of Great Salt Lake, latitude 41.6 degrees north and longitude 112.7 degrees west, according to final calculations of seismologists. Date, March 12.

So strong was this earthquake that it registered on instruments at the U.S. Coast and Geodetic Survey observatory at Cheltenham, Md., that are primarily intended for recording the magnetic field of the Earth. For 10 minutes at the time of the main shock the magnetic needle wrote a record of earth tremors, and in the afternoon another shock set it in motion for 8 minutes.

Chesterton, in his “Ballad of the White Horse,” makes allusion to the towering imagination in the ancient Irish bardic poetry:

“Tales where a man can swallow the sea

Such a sea-swallowing stunt is at least partly realized, if not by a man then at least by one of man’s works, in a new bromine-producing plant established by the Dow Chemical Company at Wilmington, N.C., and described before the meeting of the American Chemical Society by Willard H. Dow and LeRoy C. Stewart.

For this plant daily pumps through itself a literal river of salt seawater, drawing it from the ocean and discharging it again into the Cape Fear River. More than a third of a billion pounds of water—175,000 tons, or enough to float all the heavy-gun cruisers in the U.S. Navy—is sucked in daily by its monster pumps, and comes tumbling out of its discharge gates. What happens to it on the way through explains why this sober industrial chemical company has done such an apparently fantastic thing.

TADPOLE STUDIES SHOW WHAT ALCOHOL DOES TO NERVES

Little or no perceptible harm is done to the nerves by mild, daily drinking of alcoholic beverages, but permanent damage is done by the alcohol consumed on a “spree.” These facts, observed on frog tadpoles, but nevertheless applicable to man, were reported by Dr. C.C. Speidel, professor of anatomy at the University of Virginia Medical School.

The question of just what happens to the nerves during alcoholic intoxication is important because of the fact that the mental processes, the coordinating mechanism, the senses, and control of muscles and movements, which are all known to be affected by alcohol, are intimately related to the proper functioning of the nerve cells.