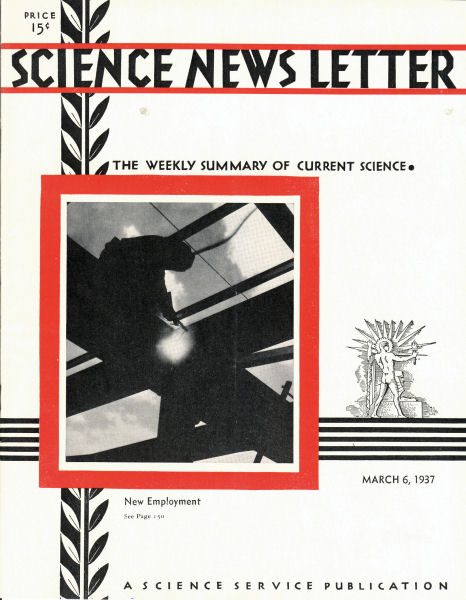 Ever since man created machines to multiply his powers of production there has been divided opinion regarding the effects upon employment which follow the adoption of technological improvements. With equal fervor the machine is blamed for unemployment and praised as the agent of our economic supremacy, and while the prophets of calamity see industrial salvation only in their land of Erewhon, Utopians joyfully measure production to infinity.

The fact remains, however, that while machinery may and often does displace the laborer, it also has the power of creating employment, and net effects are always dependent on particular circumstances, many of which lie beyond the machine.

When the electric refrigerator began to bar the ice man from America’s back doors, many a disciple of the “good old days” lamented his passing. They overlooked the fact that electric refrigeration had joined the industrial roll call, creating new employment and new purchasing power, and that the marketing of this new machine was stimulating a demand for ice. By 1930, the number of ice dealers had increased 237 percent over the census of a decade before.

A number of such examples have been pointed out by the Machinery Institute to illustrate the possibilities of technological improvements in the creation of employment and prosperity. The modern office building, for example, is alive with the lesser monsters of a mechanized age: dictaphones, calculators, typewriters, and other labor-saving devices. It might be supposed that such equipment as this would mean sharp reductions in the office force. In reality, it has made possible an amount of clerical work that could never have been attempted by unassisted labor, and in the period from 1920 to 1930 the total number of persons working as typists, stenographers, bookkeepers, cashiers, and accountants had increased by 392,000. Large-scale business built by machinery has made such workers a necessary part of structure, and a mechanized office has become the offspring of dynamo and power loom.

Welding, a new occupation not possible to hand labor, is illustrated on the front cover of this week’s Science News Letter in a photograph from the Lincoln Electric Company.

Unfortunately, the smoke-belching chimneys of industry denote the return of prosperity. Not that anyone believes prosperity as evidenced by renewed industrial activity is unfortunate; only the fuming chimneys. All too little realized still is the fact that smokeless chimneys can also be a mark of business and that it is not necessary to pollute the air man breathes to earn dollars by manufacturing.

Ever since soft, or bituminous, coal was discovered on the English seashores where the waves laid bare deposits—and the coal was called sea cole—the smoke nuisance has been literally on top of every busy community. Back in 1257, Henry III, the then King of England, had a moving day. His wife Eleanore removed from Nottingham to Tutbury Castle owing to the “unendurable smoke of the sea-cole.”

Dr. E.R. Weidlein, president of the American Chemical Society and director of Mellon Institute for Industrial /Research in Pittsburgh, Pa., has said:

“One of the biggest problems we are facing is the smoke nuisance. Smoke does not have a single saving grace. It is injurious to health. It is expensive in that it means fuel waste, high laundry bills, defacement of expensive buildings, and lessened working capacity. Experts declare that throughout the United States smoke costs each inhabitant $16 annually.”

Dr. Weidlein ought to know, for his laboratory was the source from which has sprung the newly organized Air Hygiene Foundation, which is now in the forefront of smoke fighting in America.

It is a long way from Henry III’s Queen Eleanore in both time and distance to Washington, D.C., in the year 1937, but recently the U.S. Bureau of Mines demonstrated a method of ridding chimneys of dust and smoke particles by the use of sound waves. The development because of its cheapness strikes at one of the most potent sources of industrial smoke—the small factory.

Developed by H.W. St. Clair, scientist from the Bureau’s laboratories in Minneapolis, Minn., the precipitation of chimney smoke by sound truly works a seeming miracle. In his recent demonstration, Mr. St. Clair filled a 5-inch-diameter glass tube with thick white smoke. Then he turned into the tube the sound waves of a high-pitched note of 7,000 vibrations a second. And at once, the smoke particles began to cluster in striated levels down the length of the tube and wandered off to the walls and fell to the bottom.

Interpreting the transmutation of the elements, by the changing of their atomic nuclei, must be considered from the old statistical point of view of thermodynamics rather than exclusively by the newer quantum theory, said Prof. Niels Bohr of the Institute of Theoretical Physics at Copenhagen, speaking at the meeting of the American Physical Society.

Prof. Bohr, one of the world’s great physicists, is a past winner of the Nobel Prize and best known for his atomic model called the Bohr atom. This model and the relatively simple theory which produced it are no longer used in the front rank of thinking on atomic problems, but at the time of its inception more than 24 years ago it was a major forward step in science.

Prof. Bohr believes that modern atomic theories which treat the behavior of individual atoms, particles, and nuclei are bound to fail when used on heavy atoms like lead which contain over 200 protons and neutrons in the nucleus. One must, he indicated, revert to the well-known laws of thermodynamics which have been used for 100 years to treat physical phenomena where a large number of particles are involved.

In barest outline Prof. Bohr examines, mathematically, a heavy atom like lead, forgets its individual internal particles, and treats it as though it were a tiny drop of water or mercury with a myriad of particles in it. Such a theoretical droplet of nucleus would have such an enormous density that if it were as large as 1 cubic centimeter, its weight would be over 100 million tons.

Under normal conditions, Prof. Bohr shows, the tiny droplet may be thought of as being at a fairly low temperature.

During experiments in which such a nucleus is bombarded with neutrons, however, the first effect of the impact is to raise the effective temperature to the inconceivably high level of some 50 billion degrees Centigrade.

At such temperatures, the particles within the nucleus, suggest Prof. Bohr, go into a state of violent thermal agitation. Some of the nuclear particles will “evaporate” and be hurled off with energies amounting to several million volts.

As soon as excess energy is liberated in this fashion, the nucleus will “cool” down to lower temperatures and the evaporation will cease. Any residual energy will be radiated in the form of gamma rays until the nucleus has cooled to its normal temperature.

The main point of Prof. Bohr’s new thinking on atomic physics which interests and even shocks some physicists is the idea that a nucleus can be thought of as having a temperature and that the evaporation of particles can be treated by thermodynamics.

By making detailed calculations based upon this idea, Prof. Bohr was able to explain a number of phenomena that have been observed to take place when atoms undergo transmutation from one kind to another. In carrying out his calculations, Prof. Bohr finds it necessary to use some of the ideas inherent in the more modern quantum mechanics. There is little doubt that the new Bohr theory, if proved successful, will be quickly accepted and welcomed by all physicists.