Four billion years ago, the Martian surface may have been cold and dry — not warm, watery and more Earthlike than it is today, as many scientists have suggested.

Instead of saturating the dusty surface, fluids appeared only occasionally, quickly shaping channels and other landforms that bear watery footprints. And tucked beneath the planet’s reddish, rocky sands lurked a warm and wet subterranean environment, a potential incubator powered by hydrothermal activity and revealed when meteorite impacts blasted telltale minerals from the planet’s crust.

At least, that’s the picture painted by a review paper in the November 3 issue of Nature. After synthesizing recent mineral data gathered by the Mars Express and Mars Reconnaissance Orbiter — two spacecraft orbiting Earth’s small neighbor — an international team of researchers crafted this tale of Mars’ parched, frigid history. If the authors are right, scientists hunting for evidence of past Martian life might be better off using a shovel than sniffing around the ruddy surface.

When the team studied the locations and identities of minerals on the Martian surface, looking for clues to the environments in which ancient clays formed, “‘warmer and wetter’ is one of the things we saw that wasn’t being borne out by the evidence,” says planetary geologist and study author Bethany Ehlmann of the California Institute of Technology in Pasadena.

Ehlmann and her coauthors concluded that Mars’ most ancient clay minerals — those dating back to the Noachian epoch, or the period between roughly 3.7 billion and 4.1 billion years ago — formed within the planet’s crust when warm water interacted with rock five to 10 kilometers below the surface. Minerals such as iron-magnesium clays, chlorite and serpentine need water and heat to form. Some form when temperatures are in a broad range above freezing; others, like the calcium-aluminum blend known as prehnite, require baking at particularly high temperatures (between 200Ë and 400Ë Celsius).

Normally buried, ancient hydrated minerals are revealed by erosion or impact events, and craters house the majority of observed crustal clays in their walls, central peaks, or ejected material. Forming such minerals could only have taken place underground, because of the temperatures and pressures required. “These minerals cannot have been formed on the surface, because water would have boiled,” says planetary geologist and study author Scott Murchie of Johns Hopkins University’s Applied Physics Laboratory in Laurel, Md. “We are seeing a record of warm, circulating, subsurface water.”

Clay minerals forming nearer the surface, exposed to the atmosphere and with water more mobile than trapped, are different. These types of minerals are found in putative lake beds, river deltas, and sediment mounds such as the central mountain in Gale Crater, which will be explored by the Mars rover Curiosity when it lands next summer. But scientists suspect that these minerals were transported and deposited by episodic flowing water, rather than grown on site.

The question is how long that surface water stuck around for, and where the most stable long-term water supplies were, Ehlmann says. “I don’t want the story to be, ‘All water on Mars is in the subsurface,’ because that’s clearly not the case,” she says. “The fluvial landforms and evidence for lakes are solid.”

Water-carved landscapes, like snaking channels and river deltas, played a large role in producing the current view of a warm and watery Martian past. But the study authors suggest that even transient surface waters could quickly craft these landforms. “It will be interesting to try and figure out how these channels fit in,” notes planetary scientist Ray Arvidson of Washington University in St. Louis, who was not part of the study team.

Some scientists think ephemeral surface water fits plausibly with Martian surface features and a cold, ancient Martian climate, especially since modeling a warm, early Mars has vexed scientists for a while. “This helps explain a paradox,” says Paul Niles of NASA’s Johnson Space Center in Houston. “Here, we can explain what we see with cold temperatures.”

Others, like planetary geologist Nancy McKeown of Grant MacEwan University in Edmonton, Alberta, have some reservations. “I don’t think we can fully discount long-term stable surface water,” she says. While it’s possible some of the planet’s regions hosted seasonal, episodic flows, others may have housed more permanent watery basins, she says. “We just don’t have enough evidence.”

Janice Bishop of the SETI Institute in Mountain View, Calif., is also not fully convinced. While the evidence for subterranean hydrothermal activity is strong, Bishop says it’s unlikely that transient or small amounts of surface water quickly crafted some of the river features, valley networks, or layered beds seen across Mars. “But it’s a new idea, and they have lots of good points,” she says.

Recent dispatches from the stalwart Opportunity rover, which landed on the planet in January 2004, seem to support the team’s story. In September, NASA announced that Opportunity had found a rock at the edge of Endeavour Crater — which dates back to the Noachian era — that looked as though it had been formed in a subterranean hydrothermal system. The rock, called Tisdale 2, “has these excess element concentrations for the elements you’d expect to be mobile in hot water,” says Arvidson, one of the lead scientists on the rover team. Now, he says, Opportunity is exploring a mysterious mineral vein that might provide even more evidence for warm subsurface processes.

Whether life might have evolved in the Martian subsurface is an open question. But on Earth, even multicellular organisms can live in the deep. “What this paper points to,” Arvidson says, “is that if you want to find evidence for habitable zones on Mars — areas that are warm and wet — try the subsurface.” 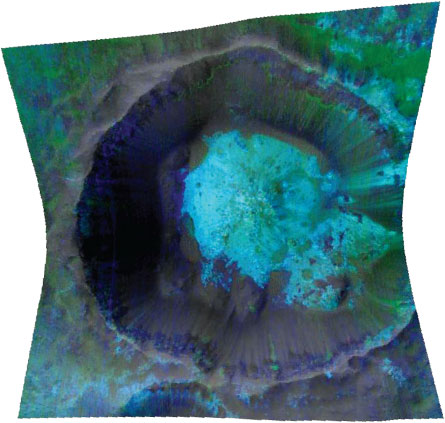 The European Space Agency’s Mars Express spacecraft and NASA’s Mars Reconnaissance Orbiter both carry spectrometers, instruments that capture visible and infrared light reflected by minerals on the Martian surface and break it down into its component wavelengths. Scientists used data returned by the OMEGA spectrometer aboard Mars Express and the Mars Reconnaissance Orbiter’s CRISM instrument to identify minerals on the Martian surface, like the iron- and magnesium-rich ones in the blue patch inside the crater at left, that typically form in the presence of heated water deep underground.