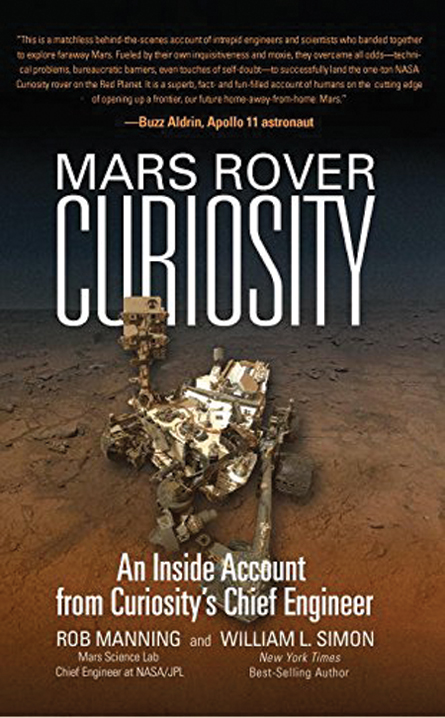 During its first two years on Mars, NASA’s Curiosity rover discovered that the Red Planet was once hospitable to life. For Manning, the rover’s chief engineer, landing on Mars was the capstone of an adventure that started 10 years and $2 billion earlier.

In Mars Rover Curiosity, Manning and coauthor Simon offer a firsthand account of designing the most complex piece of machinery ever to land on another planet. Starting with a harebrained scheme and ending with a drive across the red dust of Gale Crater, the book deftly guides readers through the many setbacks, victories and difficult decisions that came with planning an interplanetary mission.

The book is a fun way to learn about the journey to Mars. The authors steer readers through the technical challenges without getting tangled in jargon. They explain engineering solutions with clear analogies, such as comparing lowering an 899-kilogram rover dangling from a hovering spacecraft equipped with an arsenal of thrusters to controlling a weight on a string with your fingertips while your eyes are closed.

Curiosity’s story is set within the context of previous Mars missions and the culture at NASA. The endless loop of budget pressures and redesigns haunts Manning’s team, eventually leading to a two-year launch delay and a temporarily shrink-wrapped spacecraft. But in the end, the team celebrated numerous successes, from convincing NASA to support a daring landing maneuver to the celebrated touchdown to the discovery of clays that formed when water once flowed across the Martian surface (SN Online: 3/12/13).

More than just a story about a nuclear-powered, laser-wielding robot, the book is about the people who brought Curiosity to life. Hundreds of engineers and scientists worked 70-hour weeks for years to make the impossible happen. And the effort took its toll: Manning lost (and regained) over 15 pounds and struggled with hypertension.

The book is a celebration of the ingenuity, the fears and the dedication of the people who were called to pull off one of NASA’s most daring missions to Mars.