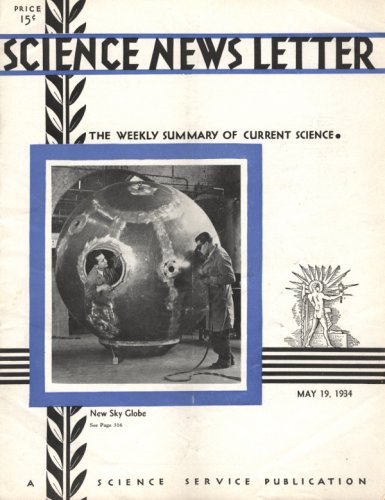 CHEMICAL FROM WELLS MAKES SHIP OF THE SKY

Pictured on the front cover of this week’s Science News Letter is the metal sphere in which Major William E. Kepner and Captain Albert W. Stevens, Army balloonists, will attempt to soar to new stratosphere heights under auspices of the National Geographic Society.

The gondola is made from alloy, of which 95 percent is pure magnesium, a chemical recovered from the brine of oil wells. Aluminum is half again as heavy as this alloy, and steel would be nearly 4-and-a-half times as heavy. The extreme lightness, accompanied as it is with strength, will give the stratospherists a decided advantage.

The man at the left is peering from one of the manholes—a worker is preparing the other. The covers of these manholes will be released on parachutes to slow the balloon’s descent when breathable atmosphere is reached.

Eastern and southern states that gazed astonished—and perhaps a bit scared—at a bleary sun masked by an endless screen of yellow-gray dust on the second weekend in May, were actually staring through parts of Kansas, Nebraska, the Dakotas, and Iowa suddenly gone “on the loose.”

For the great dust storm of mid-May 1934, which will probably still be talked about when we are all Oldest Inhabitants, was no local affair. The billions of billions of particles that filled the air had traveled far.

A pair of weather maps compiled by H. Lyman of the U.S. Weather Bureau showed a definite eastward migration of the storm area. Stations reporting dust in the air late on Thursday, May 10, were strung along the edge of the Plains region, through central South Dakota down into Oklahoma, and across the Great Lakes region, with the eastern boundary along the coast of the Appalachians. By Friday, May 11, the westernmost stations reporting dust were along the line of the Missouri River; but there had been a great southward extension into Texas, and the eastern boundary had moved from the Appalachians to the sea, as far south as the Carolina capes, thence curving inland to Spartanburg, S.C., and Macon, Ga.

WITH ELECTRON MICROSCOPES WE MAY OBSERVE THE UNSEEN

By using electrons, particles of electricity, instead of light, there is the possibility of building microscopes that will “see” minute objects several thousandths of the smallest size that can possibly be viewed by means of light detectable by our eyes.

The development of electron optics is one of the important achievements of modern physics. In this country and abroad, considerable success has been achieved in using magnetic and electric fields in vacuums to bring to a focus electrons in much the same way that mirrors and lenses are used to reflect and refract light.