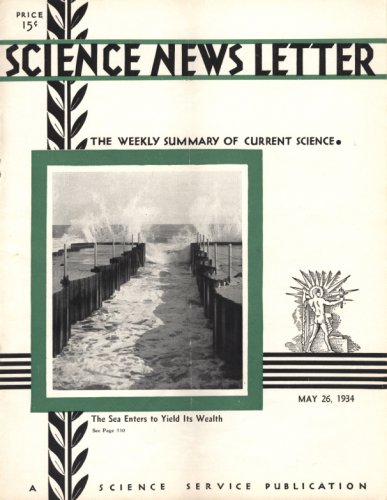 RICHES FROM THE SEA

Gold in the sea, although real enough, will not yield wealth, but extraction of bromine is a practical pursuit.

The illustration on the cover of this week’s Science News Letter shows the inlet where the water pours into the bromine plant.

A new treatment for cancer devised by a British physician has given relief to some cancer patients whose cases were called “hopeless.” It cannot be called a cure, since it has not been used long enough for physicians to know what the ultimate results will be.

The new treatment reduces pain and discomfort and often enables patients who entered the hospital complete and hopeless invalids to return, for a time at least, to their normal life. It was devised by Dr. A.T. Todd, physician to the Bristol Royal Infirmary, who reported results with it in the current issue of the British Journal of Surgery.

Dr. Todd uses a new medicine known as a sulfur-selenium colloid and another colloid of selenium that is combined with radium substances so that it is slightly radioactive.

Fear of running aground in a fog, long known as one of the greatest terrors of air traffic, may be slated for the discard. The acoustic altimeter, a new gadget for the pilot’s instrument board, answers the question: How far are we from the cruel Earth?

A new type of altimeter developed by Lieut. Leo P. Delsasso, U.S. Naval Reserve, gives a continuous succession of red flashes, each marking on a dial the exact height of the airplane from the Earth at the moment of observation. Lieut. Delsasso, who is also physicist in the University of California at Los Angeles, measures distances as near as 4 feet and as far as 700 with great accuracy. With projected improvements, a range of 1,500 feet or more is expected. Heretofore, such instruments have usually been telephonic devices requiring constant listening and some calculation, possibly with the necessity of pistol shots to furnish intense sounds. Other altimeters are mere barometers, which tell distance from sea level. Unfortunately, the sea is not usually the place the aviator is worried about.

In the Delasso altimeter a hammer strikes a steel diaphragm, sending down a short sound wave train of high intensity, and at the high treble pitch of 2000 vibrations per second. The echo returning from Earth is caught by a selective microphone tuned to the 2000 frequency. A bouncing contact on the receiving diaphragm, assisted by vacuum-tube amplification, flashes a neon lamp revolving at precise speed around a dial. The time of the round trip of the sound is read directly on the dial, not as time but in terms of distance in feet.