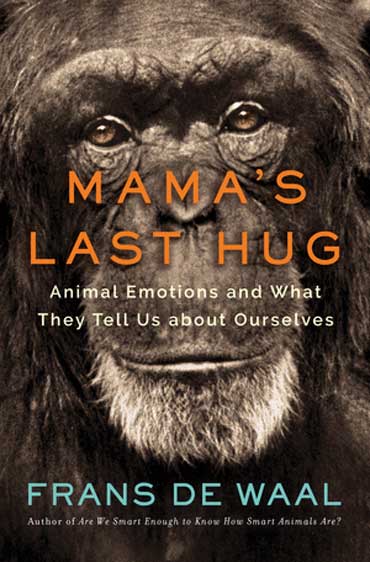 During the last few weeks of her life, Mama, an elderly chimpanzee at a zoo in the Netherlands, received a special visitor. As Mama lay curled up on a mound of straw, biologist Jan van Hooff entered her enclosure. Van Hooff, who had known Mama for more than 40 years, knelt down and stroked the arm of the listless chimp. When Mama looked up, her vacant face erupted into a smile. She reached out to van Hooff, calling out as she patted his face and neck.

For primatologist Frans de Waal, this touching scene isn’t difficult to interpret: Mama was happy to see her old friend. But such an interpretation has been taboo among many behavioral scientists, who have claimed nonhuman animals are like unthinking, emotionless machines that react to situations with preprogrammed instincts.

In the thought-provoking Mama’s Last Hug, de Waal dismantles that view. He presents piles of evidence that animals are emotional beings. The book is a companion to Are We Smart Enough to Know How Smart Animals Are?, in which he explored animal intelligence (SN: 12/24/16 & 1/7/17, p. 40).

Emotions, de Waal writes, “are bodily and mental states — from anger and fear to sexual desire and affection and seeking the upper hand — that drive behavior.” On page after page, he tells of depressed fish, empathetic rats, envious monkeys and other emotional creatures. More than a collection of fascinating anecdotes, Mama’s Last Hug weaves together formal observations of animals in the wild and in captivity, behavioral experiments and neuroscience research.

That animals have emotions makes sense from an evolutionary perspective, de Waal explains. The basic physiology and brain chemistry that give rise to emotions in humans are present in other members of the animal kingdom. And emotions offer a much more flexible way to evaluate and respond to events in an ever-changing environment than instincts do.

Of course, other animals’ emotions are not the same as human emotions, de Waal notes. There are differences “in the details, elaborations, applications and intensity.” And whether other animals are aware of their emotions, what de Waal defines as “feelings,” is still up for debate, he says.

De Waal’s conversational writing is at times moving, often funny and almost always eye-opening. Though some of his claims are more persuasive than others, it’s hard to walk away from Mama’s Last Hug without a deeper understanding of our fellow animals and our own emotions.