If Kepler 452b applied for the position of most Earthlike exoplanet, it would boast an impressive résumé. The newly discovered world (illustrated above) mimics our planet with a 385-day orbit around a sunlike star (SN: 8/22/15, p. 16). But there’s a hitch: Kepler 452b may not be made of rock. The planet is about 1.6 times as wide as Earth, and researchers couldn’t measure its mass. As a result, nobody knows if water on Kepler 452b has a solid surface on which to pool.

Kepler 452b is a super-Earth, falling between Earth and Neptune in girth. There are no super-Earths in our solar system but many around other stars. The ones scientists know the most about — worlds with known diameter and mass — tightly orbit stars smaller than the sun. Caltech astronomer Leslie Rogers analyzed several dozen of these planets (see graph below) and found that most with diameters at least 1.6 times as large as Earth’s are gaseous, not rocky.

The results suggest Kepler 452b is a bit wide for rockiness. But Rogers says the rules governing the worlds she studied may not apply to planets orbiting larger stars. And due to measurement uncertainties, Kepler 452b may actually be 1.9 times Earth’s diameter (and probably gaseous) or 1.4 times, enhancing its candidacy to be an Earthlike world. 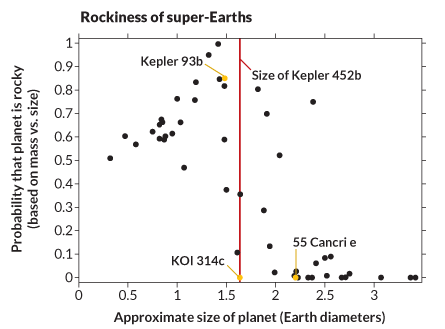 Of a subset of exoplanets with measured size and mass, most that are less than 1.6 times Earth’s diameter are probably rocky (left side of graph). Most above that threshold are gaseous (right side). But some planets show the rules aren’t clear-cut:

Discovered last year, KOI 314c is nearly the same size as Kepler 452b. Its low mass suggests that it is composed largely of gas.

This planet is about 1.5 times as wide and four times as massive as Earth. It probably consists of a rocky blend of iron, magnesium, silicon and oxygen.

The wild card of the bunch, the 2.2-Earth-diameter planet 55 Cancri e isn’t massive enough to be rocky but may be made of water or even diamond.