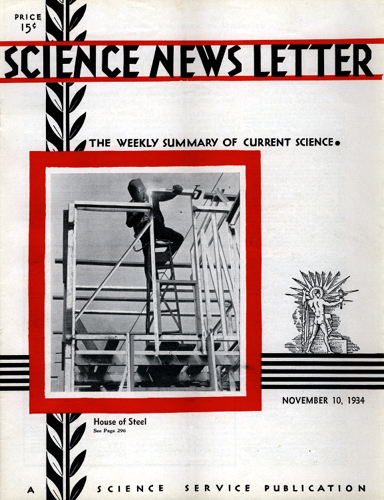 In the exclusive Ottawa Hills residential section of Toledo, Ohio, is rising the framework of the largest steel frame home ever constructed, as shown on the cover illustration of Science News Letter this week. Since the home is of welded design, the steel carpenters working on it use only one tool—the electric arc. No noise of hammers echoes throughout the neighborhood; only the hissing of the flame directed by the grotesquely masked welder.

Fifteen tons of steel will go into the completed structure. Its cost will be approximately the same as wood.

Whole sections of the walls are welded on the ground, then erected and joined with connecting sections into one solid piece of metal.

Reading hidden depths and shoals in coastwise waters with all the uncanny accuracy of a blind man running his fingertips across a page of Braille, a new instrument devised by scientists of the U.S. Coast and Geodetic Survey promises to make pilots’ and navigators’ charts many times as detailed and reliable as they have hitherto been, yet at a small fraction of the present cost for surveying.

The instrument, known as the Shoal Water Fathometer, can take as many as 20 soundings a second in depths of from 6 to 120 feet, and will measure differences in depth with an accuracy of about 1 inch. If the survey boat is cruising at 10 miles an hour, a sounding can be obtained for every 10 inches of bottom traversed.

A new kind of ether, faster-acting and with few or none of the unpleasant after-effects of the familiar ethyl ether, is being used in a few selected hospitals thought the country to ease the pains of mothers during the birth of their children, to bring quick, easy oblivion for teeth extractions, and for many other surgical procedures.

Only 2 years old, neither yet on the market nor ready for general use, but with a thrilling history already, the new anesthetic has aroused enthusiasm in some scientists who have tried it and doubt in others.

It was made-to-order at the request of a scientist who wrote its name and chemical formula and predicted its usefulness as an anesthetic before it actually existed. Other important figures in the dramatic development of the substance are two Canadian physicians who made human guinea pigs of themselves to test its safety, and some 500 patients in Philadelphia hospitals and over 300 mothers in a Montreal maternity hospital, whose records testify to its value.

It was Dr. Chauncey D. Leake, University of California professor of pharmacology, who figured out with pencil and paper that a substance known to chemists in theory only and that combined the structural characteristics of ethyl ether and ethylene would be a good anesthetic. The substance is divinyl ether, to call it by one of its several chemical names.