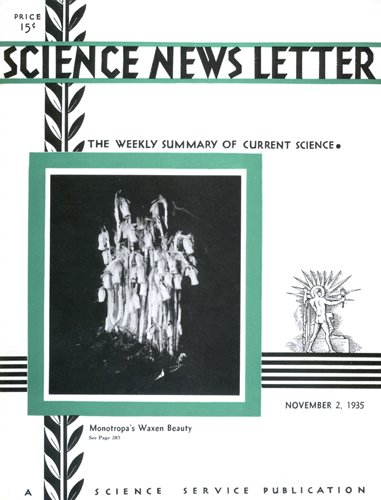 Indian Pipe, or Monotropa, a flowering plant that feeds saprophytically like a mushroom on dead and decaying plant remains, is a frequent find in moist autumn woods. The clump pictured on the cover of this issue of the Science News Letter is described by the photographer, Miss Mary L. Didlake of the Kentucky Agricultural Experiment Station, as “the largest clump I have ever seen, at least 75 separate stems. They were pink, lovely, and translucent, only the tips of the bells being white.”

Under the present conditions of road construction and braking ability, present-day motor cars “should be considered decidedly unsafe” when driven at their top speeds, declared Prof. R.A. Moyer, highway engineer of Iowa State College, before the 24th Annual Safety Congress.

A new magnetic alloy, whose permanent magnetism is so powerful that it will lift 60 times its own weight, was shown at the laboratories of the General Electric Company, on the first stop of the Tour of Industries sponsored by the engineering division of the National Research Council.

The purpose of the tour was to emphasize the importance of scientific research for industry, not only in developing new products and better ways of making old ones but also to replace testimonials and high-pressure selling, in the court of consumer acceptance, with scientific truth and tested realities, declared Maurice Holland, who organized the tour.

The new magnetic alloy is made of aluminum, cobalt, nickel, and iron, and will have important applications in the radio industry for the construction of high-quality radio loudspeakers at low cost.