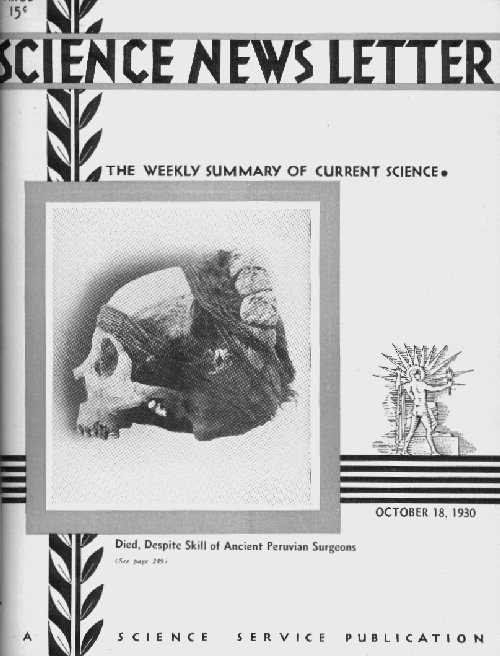 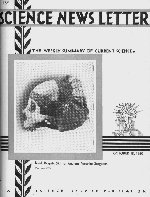 One of the most interesting of the many ancient skulls that have been brought out of Peru bears what is probably the earliest known gauze compress–certainly the earliest surgical dressing of the kind that has been discovered on this continent. The bold cranial surgery of the Peruvian medicine men has long been known, both in the treatment of head wounds and in trepanning, probably for ceremonial purposes. But here was a case that defeated their skill; the patient died and was laid away with the bandage still in place, tied with cords of llama hair.

The skull was collected by Dr. Ales Hrdlicka, of the Smithsonian Institution.

A method that enables scientists for the first time to study over a long period the microscopic details of the growth of living tissue in a warm-blooded animal has been developed in the laboratory of anatomy at the University of Pennsylvania’s School of Medicine.

Through its use, the cellular changes in living tissues can be studied as by no other method, and fundamental information regarding the manner in which abnormal cellular reactions occur in infectious diseases like tuberculosis and in tumor growth like cancer will be obtainable.

That such cellular reactions occur has long been known by the end results seen in these diseases, but by enabling the observer actually to see the entire process of cell changes, the new method opens the door to enormous advances in knowledge.

The method, for whose rapid perfection and extension the Rockefeller Foundation has made a $75,000 grant to the university, consists of the introduction of a transparent, double-walled chamber, or “window,” into a small hole made in the ear of a rabbit, the perforation being made in much the same manner as the human ear is pierced for the wearing of certain types of earrings.

The production of atomic projectiles of tremendous speed, capable of smashing the hearts or nuclei of gold and other elements, perhaps transmuting them into other substances or releasing large quantities of atomic energy, is promised by a new experiment, which has been reported to the National Academy of Sciences by a young University of California professor of physics, Dr. Ernest O. Lawrence, and his associate, Dr. N.E. Edlefsen.

It has long been the desire of scientists to have swiftly moving particles of high energy with which to bombard the compact and unknown center of atoms, but the difficulties of producing high voltages of a million or more, necessary to generate such energies in an X-ray or vacuum tube, have stood in the way.

Professor Lawrence has devised a method for speeding up the proton, or heart of the hydrogen atom, in such a way that the troubles of operating vacuum tubes at such high potentials are avoided. Although he has not yet produced the high-speed protons, with energies of a million volt-electrons or so that are needed, his apparatus has operated successfully, and he believes that it is merely a matter of time and effort before the desired high-speed protons are produced.