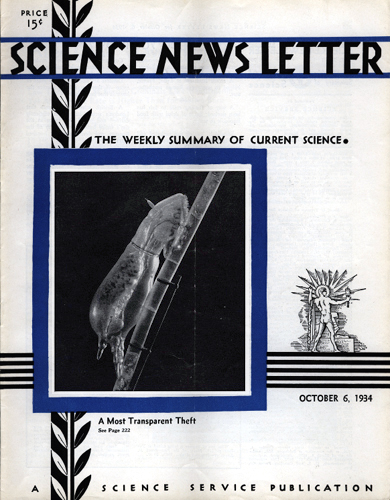 Made large enough to see without the use of a microscope, exquisitely modeled in glass as transparent as its own body, a super-heroic-sized image of a rotifer, one of the common tiny water-worms, is shown as it feeds on the filament of a freshwater alga, Spirogyra. The hungry, tiny scrap of life punctures a cell, sucks it empty like a thieving weasel at an egg, and then moves on to repeat the operation on the next cell.

The model represented on the cover of this week’s Science News Letter is in the American Museum of Natural History in New York City. It is the handiwork of the noted artist in glass, Herman O. Mueller.

Anthrax is definitely on the increase among agricultural workers in this country and is a definite menace in the wool industry in several manufacturing areas, Dr. Henry F. Smyth of the University of Pennsylvania reported to the American Public Health Association in Pasadena, Calif. The death rate for this disease, except in a few states, shows no tendency to decline, the committee of which Dr. Smyth is chairman found in studying the anthrax situation during the past 5 years. The best method of treating the disease is by large doses of antianthrax serum applied locally and injected into the veins. This treatment must be kept up until definite improvement is evident.

The increasing number of deaths from anthrax is due in part to its increase among agricultural workers, where the serum is not available. Wool and wool clothing are frequently sources of this infection. Machinery in a textile mill may become infected and transmit the infection to subsequent materials.

A distinct hazard to both acute and chronic poisoning from gasoline and benzine exists in the petroleum industry, Dr. Smyth reported. The substances act as narcotic poisons and produce injuries to the nerves in chronic cases.

New studies of the stratosphere 12 to 20 miles above the surface of the Earth are being made in Germany by the world-famous Prof. Erich Regener of the Physical Institute at Stuttgart. Small, free-flight balloons are used in the investigations. They carry aloft automatic instruments in the manner proposed in the new research program of Dr. Arthur H. Compton of the University of Chicago.

Studies of cosmic-ray intensities up to altitudes of 17.5 miles, Prof. Regener reports to Nature, indicate cosmic rays have the same specific ionizing power over the whole region investigated, from the surface of the Earth up to the great heights studied.