Three meals a day is a myth. People eat all the time, a new study shows.

People eat almost constantly for about 15 hours a day, nearly all of their waking hours, researchers learned from studying smartphone pictures that people took of food. Restricting eating time to a 10-hour stretch per day led to weight loss in a small group of overweight study participants, researchers report online September 24 in Cell Metabolism. The findings are part of a growing body of evidence that timing of meals is important for health.

In previous studies, circadian biologist Satchidananda Panda of the Salk Institute for Biological Studies in La Jolla, Calif., and colleagues showed that restricting when mice or fruit flies were allowed to eat could influence weight gain and heart health (SN: 4/4/15, p.7).

Critics of the work have long contended that the animal studies don’t apply to humans, because everybody knows that people eat three meals a day within a 12-hour period, Panda says. But he and lab colleague Shubhroz Gill (now at the Broad Institute of MIT and Harvard) weren’t convinced. 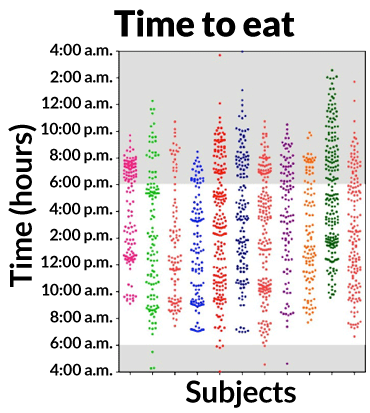 Participants in a study to determine when people eat didn’t maintain regular mealtimes, instead stringing eating out over more than 14 hours each day. Patterns for 11 volunteers are shown. Dots represent an event when a person ate or drank something other than water. Shading indicates night.

Subscribe
They recruited 156 people living in the San Diego area to take pictures of everything that went in their mouths for three weeks. Unbeknownst to the participants, their food pictures were time-stamped. Participants also wore a wristband that tracked their activity and exposure to light.

When analyzing the eating patterns, the researchers couldn’t pick out defined breakfast, lunch and dinner times for most participants. People started eating about 1.5 hours after waking up and finished a couple of hours before bedtime with no discernible large breaks in between, the researchers found. About 25 percent of calories were eaten before noon, and 35 percent consumed after 6 p.m.

That pattern may contribute to weight gain, says physiologist Kenneth Wright of the University of Colorado Boulder. For instance, sleep-deprived people tend to eat more in the evening, and that eating pattern has been associated with gaining weight, he says.

On weekends, people started eating an hour or more later than they did on weekdays. That’s the equivalent of changing time zones every weekend and may produce metabolic jet lag, Panda says.

Wright says the results of Gill and Panda’s study may surprise some people, but shouldn’t come as a shock. For many people in the United States, food is never far away, he says. “All we have to do is reach for the refrigerator or the vending machine or the [snack] drawer.”

Eight participants who were overweight and strung their eating out over 14 hours or more each day were asked to cut eating time back to just 10 hours a day without otherwise changing their diets or lifestyle. Restricting eating time cut back calorie intake by an average of about 20 percent, the researchers found.

Over 16 weeks, the overweight participants lost an average of 3.27 kilograms (7.2 pounds). They also reported that they slept better, had more energy and were less hungry at night. All of them voluntarily continued to limit eating to 10 hours per day for a year. They maintained their weight loss and the sleep and energy benefits.

Many diet studies have demonstrated weight loss, but few people in those studies have kept the pounds at bay, says Wright. “It’s a huge benefit to show you can do this in the real world and sustain it.”

Most diet studies are concerned with calories or the type of food people eat, says Thomas Woolf, a physiologist at Johns Hopkins University. “This adds a temporal component.”

It’s not clear how much time people should spend eating each day, he says. “What’s the optimal time window, and is it global or is it individual?” Woolf and colleagues at several institutions hope to launch a similar tracking study this fall to study 10,000 to 40,000 people at risk for developing diabetes. That study will use smartphone apps and activity monitors to help people track and perhaps change their eating and exercise habits for the better.

Participants in the study reported that changing when they ate was easier than changing what they ate, Panda says. That’s encouraging for researchers who try to apply results from animal studies to humans, he says. “When it comes to translation, it’s about whether people can do it or not as to whether they get the benefits.”