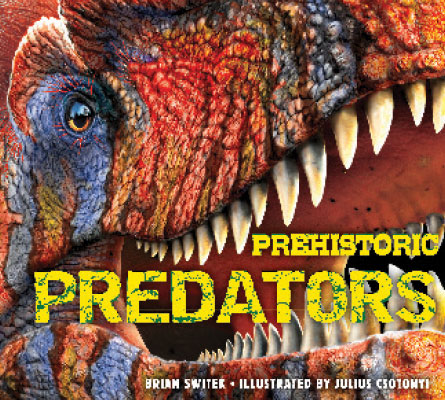 The great carnivores of the past have come a long way. Formerly sluggish, coldblooded and scaly, dinosaurs and other creatures have transformed with new scientific knowledge into speedy, graceful, feathered marvels. Now science writer Brian Switek and illustrator Julius Csotonyi give the ever-popular meat eaters updated treatment in Prehistoric Predators.

The book is marketed to children, but it should make an impression on any adult fan of dinosaurs. The predators have gained some dinofuzz but lost none of their majesty. The book starts in the Permian Period, beginning 299 million years ago, and concludes long after the dinosaurs’ demise, in the Pliocene, which ended around 2.6 million years ago. Every page highlights a predator, with information boxes providing the animal’s size, when it lived, interesting facts and a very welcome pronunciation guide. Switek also elaborates on topics such as dinosaur brains, feathers and parenting.

The gargantuan greats are well represented, and Tyrannosaurus rex gets its due. But there are also less well-known carnivores that are sure to become favorites, including the massive Titanosuchus ferox.   The barely meter-long dinosaur Sinornithosaurus millenii had wicked extendable claws, showing that size isn’t everything when it comes to effective hunting.

Each creature is lushly illustrated by Csotonyi; the art makes every page turn a wonder.

Buy Prehistoric Predators from Amazon.com. Sales generated through the links to Amazon.com contribute to Society for Science & the Public’s programs.