A new experiment captures a single parcel of light morphing between wave and particle.

Published in the April Physical Review A, the experiment dissects a light pulse associated with a single photon to expose wavelike and particle-like components. The results add to recent evidence suggesting that just as Schrödinger’s cat can be dead and alive at the same time, light can be a particle and a wave simultaneously at the quantum level. The findings also introduce subtlety to a bedrock tenet of quantum physics about light’s apparent unwillingness to display its particle and wave faces at the same time.

Light’s ability to switch between wave and particle is well established. Light waves encountering a prism disperse to produce a rainbow of colors. Particles of light, or photons, strike electronic pixels inside digital cameras to create an image. But while light can exhibit the characteristics of particles and waves, Danish physicist Niels Bohr theorized in 1927 that light could only behave as one or the other in a given experiment (SN Online: 9/15/14).

Subsequent research has borne out Bohr’s idea, even when the choice to observe wave or particle is made after the light has entered the experimental apparatus. In such a delayed-choice experiment, physicists inject a photon into an interferometer. There, the photon encounters a beam splitter, essentially an imperfect mirror. The photon either passes through and exits through one path or gets reflected and exits via a second path. That’s perfectly particle-like behavior. 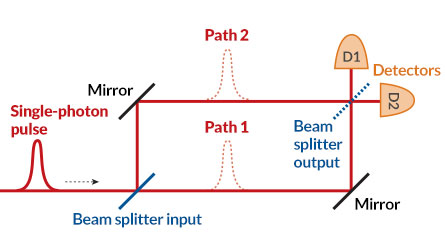 Chinese researchers used a modified version of the delayed-choice experiment (illustrated) to capture a photon morphing between wave and particle. A photon enters from the left, encounters a beam splitter and, behaving like a particle, takes one of two paths before reaching detector D1 or D2. But if a second (output) beam splitter is added, even after the photon has passed the first beam splitter, the photon will act like a wave and seemingly take both paths.

But the new study demonstrates that the distinction between wave and particle is blurrier. Quantum physicist Shi-Liang Zhu at Nanjing University in China and colleagues used the delayed-choice apparatus to measure the specially prepared light pulse of a single photon. The researchers stretched the pulse so that it took roughly 400 nanoseconds to pass a given point. This stretching allowed the researchers to have their cake and eat it too: Instead of choosing early on whether to include the second beam splitter, they could place it or remove it just as the pulse crosses the spot where the paths merge.

Zhu’s team showed that for the first 80 nanoseconds of the light’s passage, with the second beam splitter in place, a detector situated at the end of one path measured an interference pattern, which is characteristic of a wave. But once the researchers removed the beam splitter, the interference disappeared, signaling that the photon was behaving like a particle. Zhu says it’s the first time scientists have observed the pulse of a single photon exhibit characteristics of particles and waves, a state known as quantum superposition.

The study complements three delayed-choice experiments from 2012 that demonstrated wave-particle superposition. Rather than deciding whether to insert the second beam splitter, these researchers created a quantum switch that determined whether the beam splitter was present, absent or in a superposition of both. In the case of superposition, the researchers showed that the photons were simultaneously particle-like and wavelike. Davide Girolami, a quantum physicist at the University of Oxford, says Zhu’s experiment is impressive because it reveals light’s wave-particle superposition without the need for that complicated quantum switch.