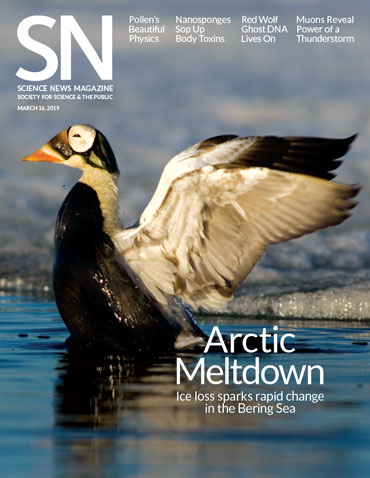 NASA’s Opportunity rover explored Mars for more than a decade until a dust storm last year led to its demise, Lisa Grossman reported in “After 15 years on Mars, it’s the end of the road for Opportunity” (SN: 3/16/19, p. 7).

Reddit users had a lot of questions about the rover, nicknamed Oppy. scazon wanted to know why the estimated life spans for Opportunity and another Mars rover, Spirit, were initially so short, and what these missions’ longevity means for future Mars missions.

Scientists originally estimated that dust collecting on the rovers’ solar panels would stop the rovers from recharging after about 90 Martian days, Grossman says. Luckily, winter wind storms cleaned off the solar panels often enough to allow the rovers to keep going. “No other rover or lander had spent so much time on Mars before, so the team didn’t know to plan for that,” she says. The next two NASA Mars rovers — Curiosity, which landed in 2012 and is still going, and Mars 2020, which is slated to launch next year — use nuclear batteries. So dust isn’t much of a concern. But the next European and Russian Mars rover is a different story. That rover, named Rosalind Franklin, is solar powered, Grossman says. Scientists plan to “use what they learned from Spirit and Oppy to keep the batteries running.”

The chances are slim, Grossman says. “The team thinks the rover powered down to the point where its internal clock got out of sync with the Martian day/night cycle,” she says. Plus, one of Opportunity’s arm heaters has been stuck on since the mission’s beginning. If the rover isn’t going into a power-saving sleep mode at night, “that arm heater would drain the batteries before it has a chance to call Earth,” she says. “So things look tough.” But if Opportunity somehow started broadcasting again, the Deep Space Network, which listens to other spacecraft on Mars, would probably notice.

Scientists don’t fully understand human consciousness, but that hasn’t stopped them from studying consciousness in other species, Sanders says. Clever studies of chimpanzees, crows, dolphins and octopuses have all turned up compelling signs of awareness (SN: 12/19/09, p. 22). Yet, animals’ brains vary a lot, so “the same brain-scanning method used for people probably wouldn’t be useful to characterize consciousness for most other animals,” she says.

Phase separation may be responsible for the diversity of pollen shapes, Emily Conover reported in “Physics explains how pollen gets its stunning diversity of shapes” (SN: 3/16/19, p. 32).

“To our knowledge, there is no connection between pollen shape and its allergenicity, but I also don’t know if that problem has been well-studied,” says Alison Sweeney, a biophysicist at the University of Pennsylvania. But, she says, pollen from plants that commonly triggers allergies — ragweed, grass and a few types of trees — doesn’t have any obvious structural similarities.