Opportunity has finally run out of, well, opportunities. After weeks of trying to revive the veteran Mars rover in the wake of a blinding dust storm, NASA has given up on ever hearing from it again.

After one last failed attempt to reach Opportunity February 12, NASA officials announced the end on February 13. “I was there with the team as these commands went out into the deep sky,” Thomas Zurbuchen, the associate administrator of NASA’s Science Mission Directorate, said in a news conference at the Jet  Propulsion Laboratory in Pasadena, Calif. “I learned this morning that we had not heard back, and our beloved Opportunity remains silent. It is therefore that I am standing here with a sense of deep appreciation and gratitude that I declare the Opportunity mission as complete, and with it the Mars Exploration Rover mission as complete.”

Opportunity landed on Mars in January 2004 for a mission that was supposed to last 90 Martian days. Its twin rover, Spirit, had landed three weeks earlier on the other side of the planet.

Spirit succumbed to a stuck wheel in 2010 (SN: 2/27/10, p. 7). But Opportunity kept going. Over 15 years, the rover found abundant evidence that water once flowed and pooled on the Red Planet’s surface. It also shattered records for planetary exploration and shaped Mars missions for years to come.

But on June 10, 2018 — 5,111 Martian days into its 90-day mission — Opportunity went silent, caught in a massive planetwide dust storm (SN Online: 6/13/18). At first, the rover team hoped Opportunity could ride out the storm and wake up when the skies cleared. But it didn’t.

A few final, Hail Mary attempts to reach Opportunity also failed. The rover’s internal clock may have stopped keeping accurate time, which could mean Opportunity was burning through its battery instead of going into a deep sleep mode at night, says mission engineer Bill Nelson of JPL.

On February 2, the rover team started sending the rover frequent commands to reset its clock. The team also directed the rover to use a backup radio channel to send messages to overhead Mars orbiters, rather than try to talk to Earth directly.

Neither strategy worked. With Martian autumn beginning on March 23, plunging the solar-powered rover into colder and darker days, NASA officially called it quits on February 13.

“Everything is only going to go downhill from here,” says Opportunity deputy project scientist Abigail Fraeman of JPL. “If we hadn’t heard from it when it was windy and there was sun on the solar panels, the odds of hearing from it when it’s dark and not windy are pretty low.”

The rover team is nostalgic and wistful, Fraeman says.

“It’s like you fall in love with a car you’ve been driving since high school,” she says. “It’s sad to have to let go of that machine.”

While mourning Opportunity’s demise, the team is also celebrating its accomplishments. What was expected to be a quick survey of a small area “turned out to be this overland expedition across another planet, with mountains and valleys and vistas and storms and sand dunes, adventure after adventure stretching on for years,” says mission principal investigator Steve Squyres of Cornell University. “Nobody expected that.”

And the adventure has changed Mars science. “Before [Spirit and Opportunity] landed, the Mars mantra was ‘follow the water,’” Fraeman says. “We’ve moved so far beyond that in terms of the kinds of questions we ask about Mars. That wouldn’t be possible without the information from these guys.”

In the beginning, though, the rover’s main goal was to find evidence of water on Mars, which it did almost as soon as it opened its eyes. This is one of the first views it saw after landing January 25, 2004, in a small depression named Eagle crater near the Martian equator.

Snapped January 28, the image shows exposed layered bedrock, which the team determined was probably sediments laid down by water. The rocks in Opportunity’s landing site had probably been formed in a long-lived salty sea (SN: 3/27/04, p. 195).

The area around Opportunity’s landing site held another watery secret in the form of these small hematite spheres. They’re so tiny that dozens can crowd into a spot just 3 centimeters across.

The rover team called them “blueberries” because their positions in the sediment reminded some scientists of blueberries in a muffin. On Earth, similar orbs form when minerals dissolved in a stream of groundwater solidify again in a different form (SN: 6/19/04, p. 388).

Opportunity’s instant success led the rover team to call it “Little Miss Perfect.” The rover’s landing was even an interplanetary hole in one, settling smack in the middle of Eagle crater.

While Spirit struggled, Opportunity clearly was an early overachiever. “Those two vehicles, we built them to be as identical as we could,” Squyres says. “But each one kinda had its own personality quirks even before we launched them.” After landing, their personalities diverged even more.

“Spirit landed in this rugged, rocky, difficult terrain,” Squyres said. “Opportunity landed in this place that was smooth and flat, and the discoveries were all there. It was really a very different experience.”

Eagle crater was just the first crater Opportunity explored. During the rover’s first six years, it made daredevil drives around and into bigger and bigger craters. For instance, in a risky move just months after its Mars arrival, the rover drove inside the edge of stadium-sized Endurance crater.

“The rover’s at a 20-something degree tilt, inside this bowl with rover death trap sand dunes below, driving on a surface that’s like plywood with ball bearings on it,” says planetary scientist Jim Bell of Arizona State University in Tempe, who oversaw the science using the rover’s cameras. “And the engineers are like ‘Yeah, let’s do it! Let’s drive down!’ That was gutsy.” The drive tested the limits of what the rover could do, says Bell.

So did Opportunity’s visit two years later to the 800-meter-wide Victoria crater.

As Opportunity skirted the crater’s scalloped edge, the rover at one point drove out onto an outcrop to get a better view of the crater floor below. Only later did the team realize that promontory had huge fractures in it. “We were saying, ‘Oh [shoot]! Wow!’” Bell says. “We could have tumbled right in.”

Opportunity’s final mission took it on a long trek across the Martian plains to Endeavour crater, an ancient 22-kilometer-wide basin with an entirely different geological history. “Opportunity effectively had two almost completely separate science missions,” Squyres says. “Everything changed. It was really like a new landing site.”

After reaching Endeavour in 2011, Opportunity continued exploring the crater’s rim for the rest of the mission. This was the first investigation of the rim of such a big impact crater anywhere in the solar system, Fraeman says. Earth’s impact craters are mostly buried and eroded, and the few that are not are much smaller. Huge impacts, like the one that created Endeavour, can dredge up rocks from deep underground, revealing new details of the planet’s history.

“Impact cratering is a hugely important process across every body in the solar system, and there’s still so much we don’t know,” Fraeman says. “Are impacts good for starting life? Do they deliver organics and heat to the surface? Or are they bad for life, do they sterilize the surface? We don’t know the answer.”

One thing scientists do know is that the Endeavour crater was once yet another watery environment, with chemistry that would have been favorable to life if anything had lived there. Water interacted with the rock multiple times. One of the best pieces of evidence for water at Endeavour crater is this vein of gypsum, spotted in November 2011.

Gypsum is made of calcium, sulfur and water, and probably formed from water dissolving calcium out of volcanic rocks. Its chemistry suggests that the water in this region was less acidic than other wet environments Opportunity had uncovered, so might have been better for life.

“With Curiosity [a rover that landed in 2012], we’ve seen gypsum veins everywhere,” Fraeman says. “Now I don’t even think twice when I see one. But it was really a new thing when we saw it at Endeavour.”

Not every rock Opportunity spotted formed where the rover found it. In 2005, Opportunity rolled up to this meteorite (SN: 2/19/05, p. 124), the first rock from space ever found on another planet.

Using spectrometers on Opportunity, the team determined that the basketball-sized space rock was made mostly of iron and nickel.

The fact that such a large meteorite made it to the Martian surface intact means the atmosphere must have been much thicker in the past, says Nelson, an idea subsequent Mars missions have confirmed (SN: 4/29/17, p. 20). Mars’ present-day atmosphere is too flimsy to slow such a big rock down. “It would blast you a nice crater and vaporize the meteorite,” Nelson says.

In 2015, Opportunity set a new distance milestone for any rover: It drove the length of a marathon, 26.2 miles (42.2 kilometers). As of June 10, it had driven 45.16 kilometers. “Not only did we complete the first Mars marathon, we’ve gone a couple of kilometers beyond that,” Nelson says.

Opportunity holds the record for the longest rover trek on any world other than Earth. This graph shows driving distances across the moon and Mars, from the Russian Lunokhod and NASA Apollo lunar rovers in the 1970s to NASA’s Curiosity rover, which landed in 2012 and is still going. 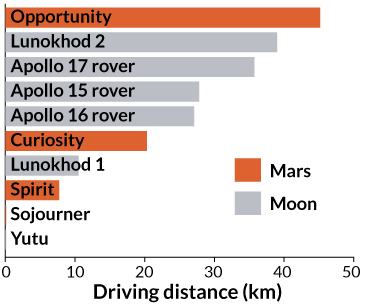 Going the distance taught the team a lot about how to drive on Mars. “We know the maximum climbable slope, or the kind of slip you can expect for various tilts and ground types,” Nelson says. Opportunity’s self-guided navigation system was incorporated into the Curiosity rover and will be used for the upcoming Mars 2020 rover as well (SN: 12/22/18, p. 5).

One early driving lesson brought a lesson in perseverance.

In 2005, the team told Opportunity to drive across some dunes, hoping to reach a more interesting target more quickly. The rover’s wheels sunk more than 10 centimeters into the soft sandy material, where it remained stuck for nearly five weeks. The team nicknamed the dune — as seen in this look back — Purgatory (SN: 6/25/05, p. 413).

“We thought, maybe this is how Mars is gonna kill us,” Bell says. “But sometimes when you spin your wheels, you can actually make progress.”

Opportunity aged well, but it did start to wear down. One of its shoulder joints stuck, and one of its wheels stopped rotating. But what finally shut the rover down was just Mars. The dust storm of 2018 choked the skies so heavily that day turned to night. The rover’s final pictures were of the sun, slowly disappearing into the gloom.

“Something was going to kill Opportunity eventually,” says Fraeman. “The fact that it was the worst dust storm Mars has seen in a decade, that’s not a bad way to go.”

And there’s a silver lining. The Opportunity team members now are world experts on Martian dust, Nelson points out. “We have a 15-year track record of dust movement and how it changes seasonally,” he says. “It’s an unparalleled record.” Planning teams for other missions already ask to see those decades’ worth of dust data, and Nelson thinks it will “absolutely” be useful for planning future human missions (SN: 1/20/18, p. 22).

Opportunity’s humans back on Earth mourn the rover’s loss. But what Bell will miss most is the people.

“These are wonderful, wonderful machines that people get to operate and virtually project ourselves out there to Mars,” he says. “The rover is the people.”