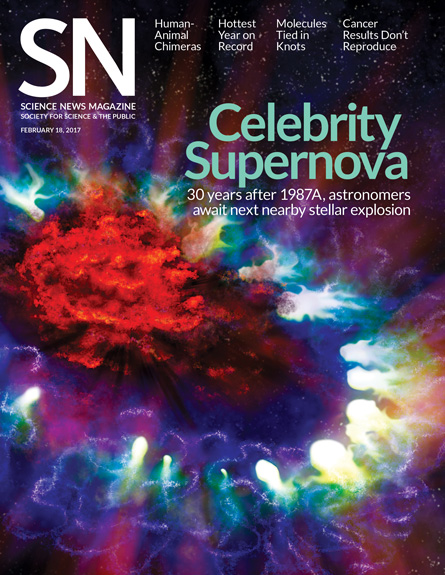 Astronomers continue to learn a lot from supernova 1987A, which burst onto the scene 30 years ago. Thanks to new detectors that can pick up neutrino signals and even gravitational waves, scientists will be ready when the next nearby star explodes, Emily Conover reported in “Waiting for a supernova” (SN: 2/18/17, p. 24).

Steve Capps wondered how neutrinos inside an exploding star could push a shock wave toward the star’s surface to make it go supernova. “That seems to be some fairly potent interaction by the neutrinos,” Capps wrote. “In many other articles, neutrinos are described as having infinitesimal interactions with matter — practically zero. How can both of these be true?”

It is true that neutrinos interact feebly with matter. But exploding stars produce a lot of neutrinos. 1987A, for example, emitted roughly 10 billion trillion trillion more neutrinos than there are stars in the observable universe. “There are so many neutrinos interacting with such extremely dense material inside the star that they end up giving the shock wave a significant amount of energy as they exit,” Conover says.

Online reader gizmowiz wondered if a chest compression machine that straps to the outside of the body might be a better, less invasive option than surgically inserting a device around the heart.

Astronomers caught their first glimpse of supernova 1987A on February 24, 1987. Science News reported on the discovery just days later, and our writers have been following the exploding star ever since. Scroll through Science News’ archived coverage, including the December 12, 1987 cover below, and watch a new video recounting the supernova’s discovery at bit.ly/SN_1987A 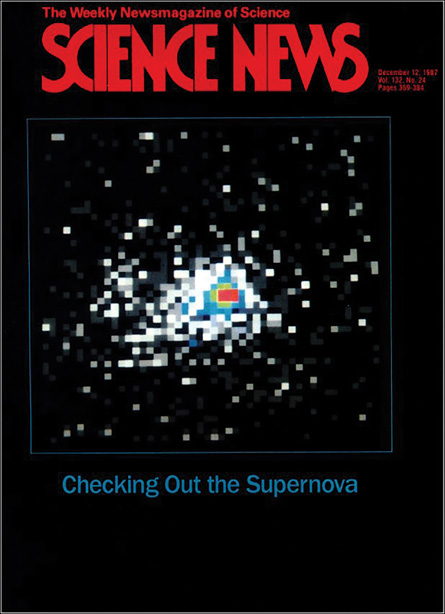 Automated CPR machines exist today and are primarily used in emergency situations, says Ellen Roche, a biomedical engineer who helped invent the robotic sleeve. Powered by batteries or air compressors, the machines are cumbersome and designed for short-term use only, she says. The robotic sleeve potentially could help people with long-term cardiovascular troubles.

A team of scientists claims to have made metallic hydrogen by compressing the element at 4.9 million times atmospheric pressure, Emily Conover reported in “New claim staked for metallic hydrogen” (SN: 2/18/17, p. 14).

“The idea that we can create almost 5 million atmospheric pressures is more amazing than the metallic hydrogen,” wrote online reader Robert Stenton. “It might be easier to turn heavy hydrogen, deuterium or tritium into its metallic form.”

Scientists have indeed tried squeezing deuterium in diamond vises. “They’ve yet to create a metal that way, but deuterium does form a solid, as hydrogen does,” Conover says. “Other elements are known to become metallic under pressure, too. Oxygen, for example, becomes metallic at nearly a million times atmospheric pressure.”

Chemists created an intricate molecular knot from 192 atoms of carbon, hydrogen, oxygen and nitrogen, Meghan Rosen reported in “Molecular knot is most complex yet” (SN: 2/18/17, p. 8).

Online readers John Turner and David Spector debated how the knot’s tightness might affect its usefulness. Turner speculated that molecular knots could be used to trap other molecules, similar to how the active ingredient in Febreze holds odor molecules. Spector wasn’t so certain. “As tight knots, they would not tend to open to accept desired molecules,” he wrote. “They would … be fairly inert.”

Whether or not the knots can trap odor molecules is unclear, Rosen says. But study coauthor David Leigh of the University of Manchester in England thinks that the technique of the research is what’s most useful.

One day, researchers might be able to use it to weave molecular strands into strong, flexible fabrics. Like Kevlar, but better, he says. “We’re quite a long way away from that,” Leigh says. “We’re knotting, not weaving, but the principles are the same.”