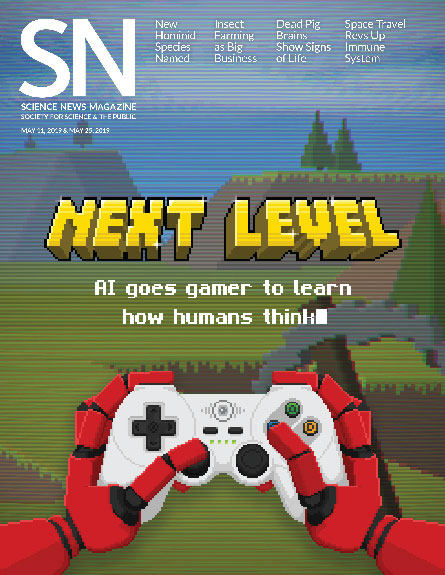 Long ago, molten iron could have erupted from metal asteroids in a process scientists refer to as ferrovolcanism, Lisa Grossman reported in “Metal asteroids may have once had iron-spewing volcanoes (SN: 5/11/19 & 5/25/19, p. 5).

“In the cold vastness of space, how long are these rocks expected to keep their thermal energy?” asked online reader Bronze Condor.

It depends on the size of the asteroid and how it solidifies, says planetary scientist Jacob Abrahams of the University of California, Santa Cruz.

In general, the cores of big asteroids stay warm longer than the cores of small asteroids. In big enough asteroids, radioactive isotopes that provide heat cluster in the mantle or even the crust. In the case of metal asteroids, though, which are thought to be the exposed cores of large planetary bodies, those warming radioactive isotopes would have been stripped away. “The core ends up pretty empty,” Abrahams says. “At that point, the heat you have is all the heat you get.”

How long metal asteroids preserve that heat depends on whether the objects solidify from the outside in or inside out. An asteroid that solidifies from the inside out loses heat “incredibly quickly,” Abrahams says. That’s because the asteroid has hot material radiating heat on its surface. An asteroid that solidifies from the outside in, however, can keep its heat for millions of years. Such asteroids “form an insulating crust that slows cooling,” Abrahams says.

Reader David Kutzler thought that another factor may help form the air-rich layer. “Water in the soil and plants in the path of the flow would instantly flash to steam, which would serve to further dilute the bottom layer of the flow,” Kutzler wrote.

That’s an interesting idea, and one that has been around for a while, says volcanologist Gert Lube of Massey University in Palmerston North, New Zealand. But there is no direct evidence that this actually occurs.

“Some test experiments that we performed on … hot experimental flows over small water bodies did not show any signs of increased mobility,” Lube says. “My opinion is that this idea needs proper investigation in the future.”

The demand for lithium is skyrocketing, thanks in part to the expected boom of electric vehicles, Carolyn Gramling reported in “The search for new geologic sources of lithium could power a clean future” (SN: 5/11/19 & 5/25/19, p. 40). The element is used to make lightweight batteries.

Electric-vehicle batteries could be recycled to recover other metals in them such as cobalt, Gramling says. “But recycling lithium is trickier and costlier, and that loop has yet to be closed,” she says. The European Union requires battery manufacturers to pay for collection, treatment and recycling of lithium batteries. The United States does not. Batteries no longer suitable for powering vehicles might also find second lives storing electricity from wind turbines and solar panels.