When a killer seaweed touches a kind of spiky coral, the coral pushes a chemical panic button that brings small resident fish to the rescue.

Unchecked, seaweed algae can overrun a coral reef, as the community dwindles in “a descent into slime,” says marine ecologist Mark Hay of the Georgia Institute of Technology in Atlanta. But within 15 minutes of contact with a toxin-making seaweed, an Acropora nasuta coral releases compounds that prompt goby fish to seek out and trim back the seaweed, Hay and colleague Danielle Dixson report in the Nov. 9 Science.

“We’ve lost about 80 percent of the living coral in the Caribbean and 50 percent in the western Pacific,” says coral biologist Nancy Knowlton of the Smithsonian Institution in Washington, D.C. “So a better understanding of what keeps corals healthy is essential.”

In reefs, corals and the seaweed algae that form lawns or shrubby thickets compete for light and space. As coral reefs decline from pollution, overfishing, climate change and other insults, biologists have seen swaths of seaweed take over. Lush seaweed intrusions repel or smother larval corals, accelerating what Hay calls the reef “death spiral.”

In this scenario, corals dwindle, and fish and other reef creatures find fewer safe nooks and crannies to live in. The reef then has fewer algae-eating fish, which means even less protection for the habitat-maker corals that maintain diverse life. “Without these,” Hay says, “you have these algae-covered parking lots.”

The discovery of A. nasuta’s on-demand guards came from thinking small. Hay and Dixson partially caged individual A. nasuta, which branch “like a tightly compacted deer’s antlers,” he says. For each coral, researchers either removed, or left alone, some of the creatures that lurk in the coral’s crannies. Then the researchers tested reactions to the emerald-green seaweed Chlorodesmis fastigiata, one of the reef invaders most toxic to corals.

When researchers fastened toxic seaweed strands to dangle against the corals, two kinds of damselfishes were no help at all, abandoning the troubled sites within 48 hours. Two species of the small colorful gobies that settle into corals, however, “were like little hedge trimmers,” Hay says.

Both the broad-barred goby (Gobiodon histrio) and the redhead goby (Paragobiodon echinocephalus)chewed back seaweed until it no longer brushed against their home coral. The trigger was a substance produced by the coral itself, the researchers found. Gobies ignored seaweedlike tufts of string brushing their corals, unless the string had been treated with an extract of the seaweed. Overall, corals caged with their vigilant gobies suffered only about a quarter of the damage inflicted by seaweed on corals without a goby squad.

Patrolling for toxic seaweed may boost one of the fish species’ own defense against predators, the researchers suggest. Biologists have known that G. histrio skin secretes some kind of toxin, which leaves several kinds of goby-eating fishes struggling to swim upright. After coming to the aid of a seaweed-threatened coral, a G. histrio goby carried particularly strong skin mucus that knocked predators for a loop twice as fast.

This previously overlooked defense partnership shows just how little biologists know about the complex food webs of coral reefs, says marine ecologist John Valentine of Dauphin Island Sea Lab in Alabama. The gobies remind him of small crabs that hide in corals and nip the tube feet of encroaching crown-of-thorns starfish that can ravage a reef.

Just how the goby alert chemistry works remains to be seen, but Hay notes that G. histrio gobies swallowed seaweed when they trimmed it. The other goby species, which doesn’t have toxic skin, mowed but didn’t swallow the algae. “Typically we think of large fish controlling algae for the benefit of corals,” says ecologist Douglas McCauley of Princeton University. The gobies are much smaller than the usual coral defenders that reef conservationists have been thinking about.

Reefs need diverse defenders, Hay says. Big grazing fish like parrotfishes and surgeonfishes have different tastes in seaweed. And a kind of rabbitfish is one of the few species, besides the gobies, that will not just ignore the chemically defended Chlorodesmis seaweed tufts. “It stops and shakes, as if it’s just so excited,” Hay says. Then the rabbitfish crops the killer seaweed down to scuzz. 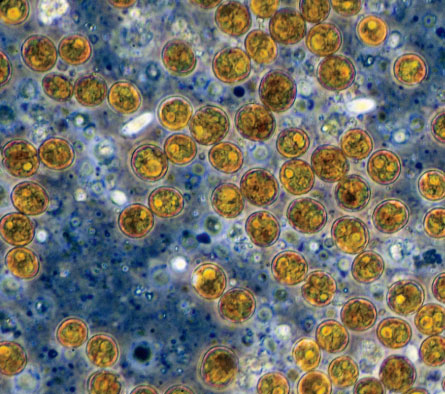 Although turtleweed alga is a beautiful killer of coral, many algae serve essential functions in reef ecosystems. Most corals can’t survive without live-in help from various kinds of single-celled Symbiodinium algae (shown). These algae shelter inside coral tissue, where they capture energy from sunlight and share the resulting sugars and other essential products with their coral landlords. Among bigger algal species, tough cement makers called crustose calcareous algae help hold a reef together and create ridges that withstand pounding waves. Some of these calcareous crusts, such as Titanoderma prototypum, attract coral larvae searching for a home. Small filamentous algae power the base of the food web by serving as underwater meadows that nourish grazing animals. Other algae, largely inedible, such as Halimeda species, offer hiding places for youngsters dodging predators. In some senses, a coral reef is an algal reef too. — Susan Milius