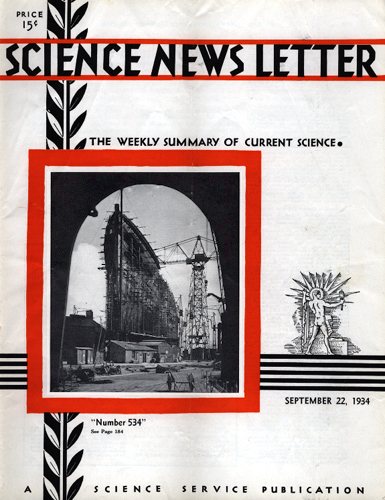 CUNARD OCEAN GIANT READY TO TAKE TO THE WATER

September 26 marks the day when King George and Queen Mary of England journey to the shipbuilding town of Clydesbank, Scotland, to launch the new Cunard super-liner—the “534.” Unofficially, the Princess Elizabeth has been suggested as the name for the new giant of the seas, but the ultimate name of the ship is carefully shrouded in mystery.

Synthetic vitamin C, called ascorbic acid, in its first actual use on medical patients is producing very striking and unexpected disease conquests, the British Association for the Advancement of Science was informed by Prof. A. Szent-Györgyi, the Hungarian chemist who played a major role in the artificial manufacture of this important vitamin.

The mouth disorder known as pyorrhea, a certain kind of hemophilia, which is a disease of bleeding, certain forms of hemorrhagic nephritis, and several other diseases against which medicine was helpless are seemingly being cured by ascorbic acid. Ascorbic acid is not a cure for hereditary hemophilia.

“This is the more striking since these pathological conditions have not been thought to be connected with lack of vitamin,” Prof. Szent-Györgyi explained. “These curative effects suggest that humanity is suffering much more gravely from a lack of vitamin C than has hitherto been supposed.”

Disfiguring colorations of the skin brought on by illness are also made to disappear by ascorbic acid. Patients with Addison’s disease, who have a yellow color, can be bleached out again by the use of this substance.

In trying to solve a problem, such as discovering in which of a group of boxes lies the coveted banana, the chimpanzee goes to work in a systematic manner. He doesn’t make his attempts in any random, haphazard manner. This evidence of the ape’s cleverness has been discovered by Kenneth W. Spence, of Yale University’s Experiment Station at Orange Park, Fla.

The attempts of the chimpanzee appear to follow a definite pattern, Mr. Spence declared. For example, if the animal first chooses the first box at the left end of the row, but finds it empty, it will next try the second from the left, and then the third from the left, and so on until the correct box is found. Marked individual differences were found in the speed with which they shift from one incorrect choice to another, and in the tendency to repeat an incorrect choice.