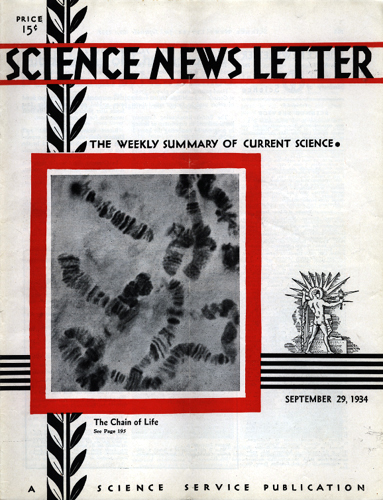 Demonstration of structural details within the chromosomes, considered by most biologists to be the bearers of the “genes” that control the inheritance of physical and physiological characters in animals and plants, compares in importance with the demonstration a few years ago of the divisibility of the atom into smaller electrically charged particles. Like the atom, the chromosome was suspected of being made up of distinct functional units on theoretical grounds for some time before the scientists’ “hunch” was proved to be correct.

The brilliant work of Dr. Calvin B. Bridges of the Carnegie Institution of Washington, carried on at the California Institute of Technology and lately in the genetics laboratories of the Carnegie Institution at Cold Spring Harbor, N.Y., in making clearly visible the separate units of which the chromosome is composed, depends upon a paradox. For to see the chromosome-units distinctly, it is necessary first to get out of the way the very stuff that gave the chromosome its name. The name “chromosome” is derived from the Greek for “color body,” and was given to these small structures within the cell nucleus when it was observed that they became darker than the rest of the protoplasm upon the application of certain stains to make details of nuclear structure visible.

SCIENCE AIDED THE ENDEAVOUR IN HER RACE FOR THE CUP

Science and mechanics can claim their share of credit for the showing of the British yacht Endeavour in the races for the America’s Cup off Newport, R.I.

Old salts may shake their heads over instrument boards for yachts, triangle booms, and all the other “gadgets,” but both cup contestants have their share of them. A large part of the job of the scientists in the afterguards of both cup racers is devoted to the perfection and maintenance of “new-fangled” mechanical helpmates to the art of sailboat navigation.

To any yachtsman a boom is—or perhaps it is better to say, used to be—a piece of wood to which the lower edge of the mainsail was attached with rings. The boom rotated about the mast, and by setting it at different angles the maximum velocity through the water was obtained.

But on the Endeavour, the boom is not just a cylindrical length of wood; it is triangular in cross-section. Such a triangular boom is a three-sided structure of wood with a flat side just under the edge of the mainsail. Rings attached to the “foot,” or bottom, of the sail slide along metal rods on the boom and set it at right angles to its axis.

As the yacht tacks, the rings slide along the rods and allow the foot of the sail to assume the best aerodynamic curve. Said another way, the sail takes a “set” which brings about the least “spilling” of air from it and hence the maximum driving force.

A new street car representing 4 years of research and a million dollars in cost was exhibited in Cleveland. The car is a street car rider’s dream of the millennium. Every avoidable annoyance incidental to transport by urban electric car has been removed from the new development.

Forced ventilation is supplied, the seats all face forward and are of the familiar motor-bus type: deep, soft, and upholstered at side and back in leather. The windows really move; not by two-handed brute force with the help of a crowbar, but like windows in automobiles. The first high step getting into the car has been replaced by stairs like those of the home. Wherever one stands in the car there is a handrail or grip so near that not even one step is necessary to reach it. Light is indirect and provides three times normal street car illumination, without glare.

Noise is diminished within the car by replacing steel coiled springs with rubber pads. The wheels are resilient; a combination of steel and rubber so designed that they transmit less vibration and noise than formerly.