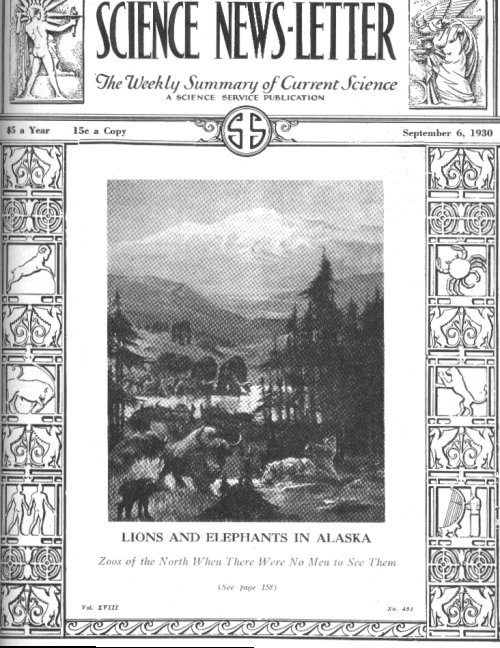 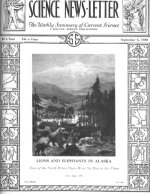 Alaska, with its vast herds of caribou, its foxes and beaver, its mountain sheep and goats, and its great bears, black, brown, grizzly, and white, is one of the world’s game paradises; but 100,000 years ago, long before the slow-witted men who inhabited Europe thought to follow them, the peninsula (then an isthmus to Asia) teemed with great beasts that are only fossils now. There were huge, earth-shaking elephants with tusks a dozen feet long, magnificent, maned lions, and the high-shouldered ancestors of our modern bison. A bit of this great zoological hegira from the Old World to the New has been caught in a painting by Mrs. E. Rungius Fulda and is reproduced on the cover of this week’s Science News-Letter through the courtesy of Natural History.

Hope that one of the world’s oldest and most loathsome scourges may be conquered is contained in reports from Japan that Dr. K. Shiga, bacteriologist and dean of the Imperial Medical Faculty at Seoul, Korea, has discovered that vitamins in sufficient amounts will prevent infection of animals, and presumably men, with leprosy.

The archaeology of a forest, to match the archaeology of the human settlements that nestled in and around it and depended on it for food, houses, and fuel, has been traced for 100,000 years or more by Dr. T.W. Woodhead, well-known British scientist. Dr. Woodhead has prepared a series of model maps of the area he studied, and he displayed them at the International Botanical Congress held at Cambridge, England.

The forest in which Dr. Woodhead was interested lies on the southern Pennines, a range of low mountains running northward through north central England. They were not entirely submerged by the ice of the glacial period, but raised their summits through the sheet like the present “nunataks” of Greenland. The first model shows the bleak landscape of that period, with only meager mosses and ferns on the ground and low scrub growths of birch and willow above them. The Arctic Circle had moved south to England, so far as the plants were concerned, and until a milder climate set in no men appeared in that part of the land. The earliest flint implements found there are of the Aurignacian type, used by comparatively advanced Stone Age men.

The coming of a milder climate brought heather and grass, such as are now found in the Scottish highlands. But though the climate was milder, it was drier, so a rich vegetation could not develop. Then improved moisture conditions set in, and at last a forest came into being: alders and willows in the swamps, oaks and hazels on higher land, with birches and heath in places. Here were found the first evidences of Stone Age man, tools resembling types found in Belgium.

With the coming of New Stone Age time, the climate became, paradoxically, too moist for forest, and the upland degenerated into a peaty morass. The lower slopes still supported a mixed forest. Bronze Age time brought a somewhat drier climate again, but the wetland conditions persisted nevertheless on the plateau.

From this time on, the changes in the vegetation on the hills were influenced more by the activities of man than by the climate alone. There are abundant evidences of human occupation, in roads and trackways, earth-works and Roman camps.

The first definitely dated reference in history is in the Doomsday Book, the great census record of 1086 A.D. This tells of hills covered with peatmoss, birch-heath woods on the higher slopes, plow lands and pastured woodlands on the spurs, alder-willow thickets in the swamps and river bottoms.

Modern times show a further encroachment on the forest by the uncontrollable moorlands of the summit, and by farmlands and pasture on the slopes. Such remnants of the original forest as still exist are confined to stony encarpments or are enclosed as parklands.