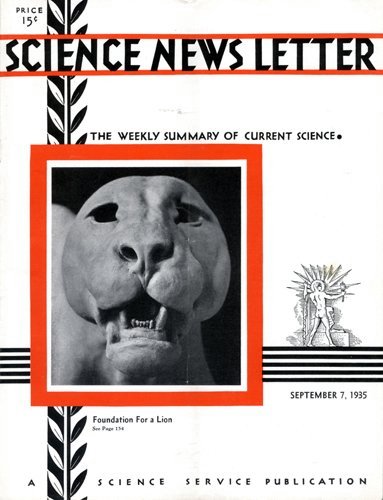 The old-time museum exhibit was based on the false proverb that beauty is only skin-deep. Beauty is far deeper than that. True beauty, whether in a woman or a lioness, goes clear to the bones. Beauty is form even more than color or external texture; the skin is only beauty’s container.

It is the realization of this correct philosophy of beauty that has wrought such a revolutionary improvement in museums during the past few years. Preparators now take meticulous pains to reproduce, on the mounts that are to display their skins, the exact form of the animal’s lithe grace, its smooth waves of muscle, every vibrant detail that existed under its skin while it was still breathing and moving. The museum preparator is no longer an animal stuffer, he is an animal sculptor.

Half as many colds during the winter, or even less, as a result of a capsule taken before breakfast. It sounds like a dream or a patent medicine advertisement.

The dream came true, however, for several hundred persons who were the human guinea pigs in the common cold research of Drs. George E. Rockwell and Hermann C. Van Kirk of the University of Cincinnati and Dr. H.M. Powell of the Lilly Research Laboratories, Indianapolis (Science, Aug. 23).

The capsules contained measured amounts of cold vaccine made of pneumococci, an influenza organism, streptococci, and another organism found in the nose and throat and known to scientists as M. catarrhalis. The capsules were taken with half a glass of cold water half an hour before breakfast. One capsule was taken each morning for a week, and thereafter one or two were taken each week throughout the season.

GENES HAVE DOUBLE FUNCTION: VITAL AS WELL AS HEREDITARY

Genes, the invisible units of heredity, do double duty. They determine the expression of the body’s thousands of characters, such as color of hair or eyes, and they also serve a general purpose in merely keeping you alive. If every gene needed for every special purpose were not also present in every cell, even in places where it is not needed, you would not be alive at all.

This double function of genes was brought out in discussion by Dr. M. Demerec of the Carnegie Institution of Washington, speaking at the meeting of the Genetics Society of America, held at Woods Hole, Mass.