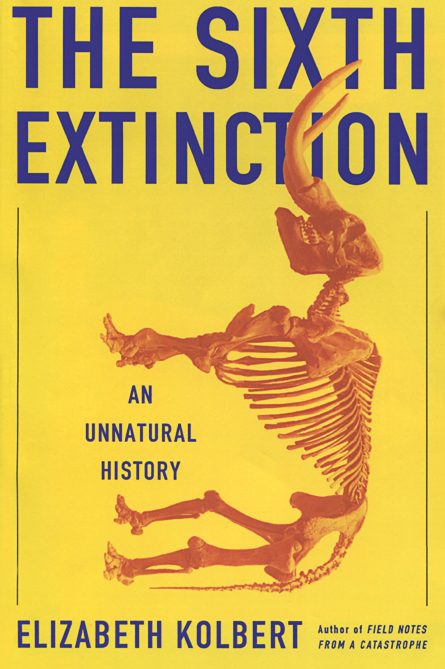 Almost nothing in nature is so rare as a mass extinction. On only five occasions in Earth’s long history has a large fraction of the planet’s biodiversity disappeared in a geological instant. But, journalist Kolbert reminds us in her new book, we are well on our way to making it six.

A lesser writer tackling this subject might offer up a dreary list of dead and dying species; Kolbert instead tells a scientific thriller. The tale begins in 1739, when strange bones turned up near the Ohio River. Stumped, the French scientist Georges Cuvier declared they must belong to a mammal that no longer exists, which he called the mastodon. As evidence for such archaic forms piled up, Cuvier went further, proposing that Earth’s history is full of lost species, and sometimes they wink out in large numbers.

Not until the last few decades did paleontologists fully accept this “catastrophism.” Most scientists now believe a meteor impact did in the dinosaurs, as well as the ammonites, extinct mollusks to which Kolbert devotes a loving chapter. That meteor had nothing on the earlier Permian extinction, though, which nearly wiped out multicellular life.

Humans are the new catastrophe. Large mammals are now mostly gone or headed that way, and we are pushing out other biota through habitat destruction and species introductions, Kolbert writes. Ecologists are feverishly studying these phenomena; Kolbert follows them to fragmented tropical rainforests in Panama and Peru, caves of bats stricken with white-nose syndrome in New York and acidifying coral islands on Australia’s Great Barrier Reef. These modern eco-disasters are depressingly familiar, but united by Kolbert’s masterful reporting, they gain a new urgency.

The scientists Kolbert meets also offer a glimmer of hope. We are, if perhaps a singularly destructive species, also unique in systematically gathering and preserving knowledge about our world. The big question, which Kolbert leaves open, is whether we can use this knowledge to avoid dooming much of the rest of life on Earth — and with it, possibly ourselves.