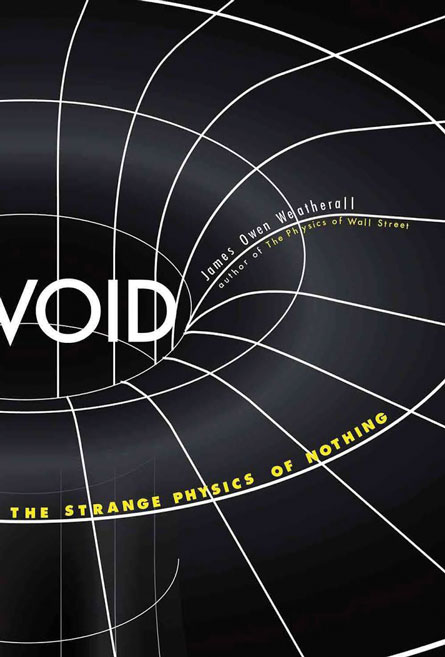 In empty space, quantum particles flit in and out of existence, electromagnetic fields permeate the vacuum, and space itself trembles with gravitational waves. What may seem like nothingness paradoxically teems with activity.

In Void: The Strange Physics of Nothing, physicist and philosopher James Owen Weatherall explores how physicists’ beliefs about nothingness have changed over several revolutionary periods. The void, Weatherall argues, is physics distilled to its bare essence. If physicists can’t agree on the properties of empty space, they won’t be able to explain the physics of planets or particles either.

Scientists have argued over nothingness since the early days of physics. Vacant space was unthinkable to Aristotle, and Descartes so abhorred the idea of a vacuum that he posited that an invisible “plenum” suffused the gaps between objects. But Isaac Newton upended this view, arguing that space was just a barren container into which matter is placed.

Since then, physicists have continued to flip-flop on this issue. The discovery in the mid-1800s that light is an electromagnetic wave led scientists to conclude that a vibrating medium, an “ether,” filled space. Just as sound waves vibrate the air, physicists thought there must be some medium for light waves to ripple. Albert Einstein tore down that idea with his special theory of relativity. Since the speed of light was the same for all observers, no matter their relative speeds, he reasoned, light could not be traveling through some absolute, stationary medium. But he later predicted, as part of his general theory of relativity, that space itself can ripple with gravitational waves (SN: 3/5/16, p. 6) — suggesting that the void is not quite empty.

Under the modern view of quantum physics, various fields pervade all of space, and particles are simply excitations, or waves, in these fields. Even in a vacuum, experiments show, fluctuating fields produce a background of transient particles and antiparticles. Does a space pulsating with gravitational waves and bubbling with particles really qualify as empty? It depends on the scientific definition of “nothing,” Weatherall argues, which may not conform to intuition.

Weatherall serves readers a fairly typical buffet of physics theories, dishing up Newtonian mechanics, relativity, quantum mechanics and a small helping of string theory. But he does this through a lens that highlights connections between those theories in a novel way. Weatherall contends, for instance, that differing notions of nothingness between theories of general relativity and quantum mechanics could help explain why scientists are still struggling to unite the two ideas into one theory of quantum gravity.

Exploring the physics of nothing demands quite a bit of wading through the physics of something, and it’s not always clear how the threads Weatherall is following will lead back to the void. When he finally makes these connections, though, they often reveal insights that are missed in the typical focus on things of substance.

Buy Void from Amazon.com. Sales generated through the links to Amazon.com contribute to Society for Science & the Public’s programs.