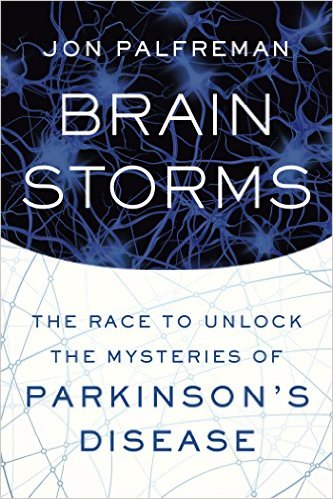 In 2011, science journalist Jon Palfreman saw a doctor about a tremor in his left hand. The doctor diagnosed Palfreman, then 60, with Parkinson’s disease. The disorder, which is newly diagnosed in 60,000 Americans each year, promised a crippling future of tremors, loss of mobility, dementia and more. Palfreman decided to use his reporting expertise to investigate how Parkinson’s disease affects the body and learn about efforts to find a cure.

Palfreman relates complex research studies as gripping medical mysteries. He describes how scientists connected Parkinson’s with the dramatic loss of the brain chemical dopamine and with tenacious protein knots called Lewy bodies that are a hallmark of the disease. Palfreman also explores treatments past and present, including the widely used drug levodopa that restores motion (sometimes uncontrollably), gene therapies, brain surgeries and promising experimental antibody treatments that attack and dissolve misfolded Parkinson’s-related proteins.

Ultimately, Brain Storms is about more than Parkinson’s disease; it’s about the people living with the disorder. Palfreman describes patients who must teach themselves to walk without falling over or who freeze in place. He writes about a researcher driven to search for a cure after the disease affects his own father.

There’s also Palfreman himself, navigating his dual roles as patient and reporter with candor, curiosity and enduring hope that a cure is on its way. Finding a cure is “everyone’s business,” Palfreman writes. Sixteen percent of the world’s population will be older than 65 by 2050, putting them at risk for age-related diseases such as Parkinson’s. As Palfreman writes, “There’s no time to waste.”

Buy Brain Storms from Amazon.com. Sales generated through the links to Amazon.com contribute to Society for Science & the Public’s programs.