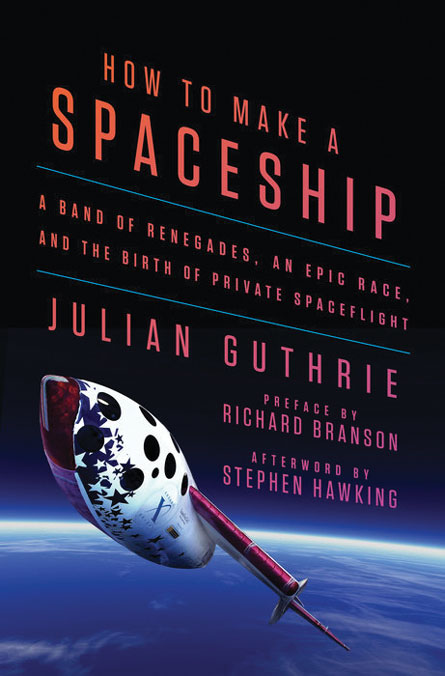 How to Make a Spaceship
Julian Guthrie
Penguin Press, $28

On the 47th anniversary of Sputnik’s launch, former Navy pilot Brian Binnie flew a rocket-powered ship past the brink of outer space.

Named SpaceShipOne, the ship cruised up 112 kilometers, then plunged back to Earth, wings flared like a shuttlecock to slow its descent. SpaceShipOne’s October 4, 2004, flight, the second in two weeks, earned its makers fame and the Ansari XPRIZE.

The $10 million prize, created in 1996, aimed to spawn a fantastical new kind of tourism. One day, perhaps, ordinary people could book a ride on a rocket and gaze down on Earth from the blackness of space.

It was a prize to ignite the private space industry and to “bring about change in the stagnant aerospace world,” said XPRIZE founder Peter Diamandis. To win, contestants had to build a fully reusable manned spacecraft — something not even NASA has achieved (though the space shuttle came close).

In How to Make a Spaceship, journalist Julian Guthrie follows a handful of teams from around the world on the race to win the prize. She givesreaders a front-row seat to a rocket launch in Romania, a crash landing in Texas and spaceship building in California’s Mojave Desert.

Guthrie introduces the people behind the tech stuff, too. They’re engineers, pilots, airplane designers and more, and they’re so fired up about getting to space that they tap savings accounts, pull all-nighters and strap themselves into carbon fiber cockpits for test flights. These characters give Guthrie’s story lift, offering examples of inventiveness and drive as inspiring as the idea of spaceflight itself.

But frustration ensues, felt most keenly by Diamandis. The real challenge seems to be money. Diamandis, a doctor, entrepreneur and space aficionado, spent years securing the prize’s funding, knocking on the doors of nearly every famous billionaire around, including Richard Branson, Jeff Bezos and Elon Musk. (Eventually, the Ansari family, which earned its fortune in telecommunications, stepped in to sponsor the prize.)

But today the future of private spaceflight remains uncertain. SpaceShipOne now hangs in a museum, and SpaceShipTwo (known as VSS Enterprise) tore apart during a 2014 test flight. And despite successes, in September, a rocket from Musk’s aerospace company, SpaceX, burst into flames during a prelaunch test.

A second version of SpaceShipTwo, VSS Unity, may begin test flights this fall. Owned by Virgin Galactic, VSS Unity could be the first to offer spaceflights to paying customers. Making a spaceship is a dangerous business to be sure, but as Guthrie so vividly shows, some people will risk anything to reach the stars.

Buy How to Make a Spaceship from Amazon.com. Sales generated through the links to Amazon.com contribute to Society for Science & the Public’s programs.