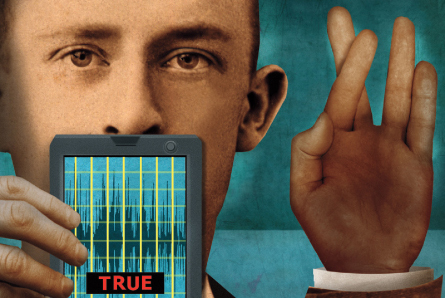 Lie detectors blend fact and fiction
Devices that can discern honest statements from lies are much sought after, especially since a 2003 National Research Council report concluded that traditional polygraphs flag stress, not deception. But newer gadgets increasingly used by police departments and other agencies don’t tell fact from fiction either, researchers now say (SN: 7/3/10, p. 28). Known collectively as voice stress analyzers, these next-gen lie detectors aim to tease out truth by reading consistent changes in speech that occur when someone is lying — a signature that acoustics researchers say may not exist. Two large studies, one examining voice stress analyzers in a lab and the other in a jailhouse setting, found that the analyzers do pinpoint some lies. But they also peg true statements as lies at similar rates. These false positives, which are often left out of studies and company descriptions of the technologies, are key for evaluating merit, says James Harnsberger of the University of Florida in Gainesville. “A common mistake is to only report how many lies were successfully detected,” he says. “You could write ‘lie’ on a piece of paper and hold it up every time someone speaks to you, and you will detect 100 percent of the lies.”

Picker-upper A gripper made of a bag of coffee grounds (left) has advantages over robots that use individual digits (SN: 11/20/10, p. 10).

Smoother pixel Fifty years after the first digital image, one of its creators devises an algorithm to take the edge off square pixels (SN: 7/17/10, p. 17).

Got sound? Sterilizing milk by bombarding it with sound waves leaves a fresh, raw taste that is lost in high-temperature pasteurization (SN Online: 7/21/10).

Dusty detector A new twist on an analytical method called Raman spectroscopy uses a sprinkling of gold to detect trace substances and could be used at crime scenes (SN: 4/24/10, p. 15).

Trading places Researchers have found the optimal spots on the globe for speedy electronic communication with the world’s 52 major financial exchanges (SN: 11/20/10, p. 10).

Mind over machine With only their thoughts, people whose brains are connected to computers can toggle between images of Marilyn Monroe and Josh Brolin (SN Online: 10/27/10).

Bomb foiler A handheld device can sniff out minuscule amounts of TATP, the explosive favored by the would-be shoe bomber (SN: 12/4/10, p. 8).